South Sudan ‘not a failed state’ 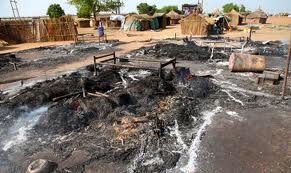 Remains of a destroyed a town in South Sudan.

The government has denounced a report published by the American Fund for Peace Organization that ranked South Sudan at the top of fragile states.

South Sudan replaced Somalia as the world’s leading fragile country, according to the report.

The research was conducted in 178 countries.

It looked at group grievances, uneven development, poverty and economic decline, public services, human rights, and refugees and IDPs, as the reasons that create fragility.

The government says the recent crisis has contributed to the social and economic instability in South Sudan.

“We as a Government of Republic of South Sudan, we are saying that we are not a failed state as other people may think. It is a new nation that has gone into crisis early on and so now we are managing our development effort for the Republic,” Amb Mawien Makol, spokesperson of the Ministry of Foreign Affairs and International Cooperation.

“The fact that we managed the crisis within a month indicates that we cannot be compared with other countries that are failed.”

Ambassador Makol urged the international community to help the country out of the crisis.

“What we need from international community is not to condemn the country but assist this country.”