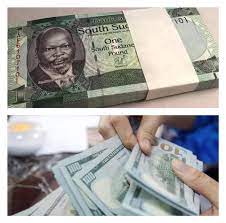 Picture of a bundle of South Sudanese pound currency and the US dollars. As of this Sunday, 1 US dollar is exchanged with 490 SSP. | File photo

The South Sudanese pounds have had significant gains against the US dollars in the recent days, but commodity prices are still at record high.

As of Sunday, a dollar sells at 500 pounds in the parallel market, down from 640 pounds per a dollar last week.

The new improvement has been attributed to speculations in the market, pounds scarcity as well as the recent reshuffle by President Salva Kiir.

However, Robert Francis Pitia, the Chairperson of the Chamber of Commerce said the commodity prices will continue to increase despite the appreciation of the local currency.

“The factors that are increasing the prices in the market are many. Dollar is one of the factors,”said Pitia.

He added that commodity prices will only reduce upon harmonization of the taxes in the country.

“I think we find ourselves in the same scenario whereby the dollar comes down and the prices are not coming down. Because there are some taxes which have been duplicated and being levied on the traders,” he said.

The businessman argued that, the duplication of taxes at the national and states level remain one of the main challenges facing the fight for economic recovery.

“We need also them to coordinate with the national so that this issue should be addressed once and for all,” Pitia told Eye Radio on Sunday.

The Central Bank is fighting inflation by auctioning hard currency in its reserve to Forex bureaus and commercial banks.

In July alone, the Bank auctioned nearly 50 million US dollars to commercial banks, as a measure to stabilize the skyrocketing exchange rate.

Meanwhile, the head of the National Chamber of Commerce called on the government to intervene by supporting cooperatives that provide products at acceptable prices.

“We need also the government to also create a cooperative center, so that at the residential areas there must be centers in bringing food at the lower prices and affordable to our all citizens so that to compete with the market.”