You are here: Home  |  Economy | News   |   Two arrested in Konyokonyo protest over cost of living

Two arrested in Konyokonyo protest over cost of living 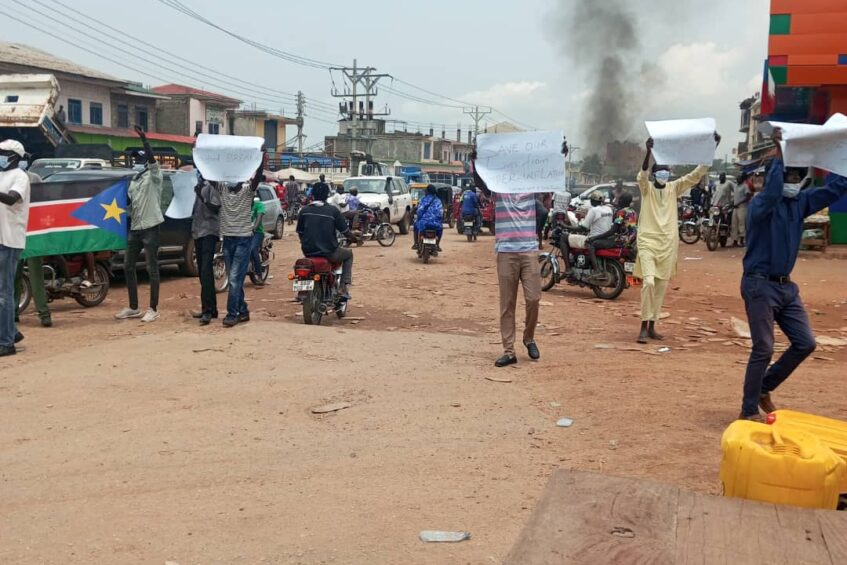 Handful of protestors seen in the streets on Juba before being dispersed by police. | 7th August 2022. | Courtesy.

Security personnel in Juba have allegedly arrested two youth, who briefly staged a peaceful protest against high cost of living in the country.

The handful of protesters took to the street on Sunday afternoon, holding posters such as “We cannot manage water and sugar now! We cannot afford bread now! and Save our lives from hyperinflation.”

The young people were also demanding the unity government to address youth unemployment and insecurity.

According to some of the protesters, they were chased away by the security personal while protesting at Konyokonyo market.

“We organized the protest and when we were trying to move in Konyokonyo market, the policemen as well as the national security arrive and they caught two of our people,” said one of the protestors whose name Eye Radio withheld on safety ground.

He said the officers shot in the air to disperse them, adding that the whereabouts of the two young men is not known.

Efforts to get a comment from the South Sudan National Police Service were not immediately successful.