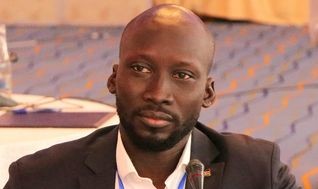 The President of the South Sudan National Youth Union has defied his suspension by the Minister of Youth and Sports, terming it unconstitutional.

Gola Boyoi Gola claims the Minister of Youth and Sports has no constitutional mandate to suspend an elected leader of the Youth Union.

When contacted by Eye Radio, Mr. Gola Boyoi denied having written the letters.

“I did not write any letter. And I put it clear that these letters, I have not even seen them myself. People are just talking about how it was circulated in 2020. Like a lot of letters have been forged,” he said.

In the ministerial order issued on Thursday, Minister Albino Bol Dhieu called for the suspension of Gola Boyoi Gola, pending an investigation.

However, Mr. Boyoi says the letters are invented and the suspension is politically motivated.

“I term this ministerial order as politically motivated, how can you suspend someone without first authenticating the documents? If you have not yet generated the fact, what makes you arrive at the conclusion?,” Gola asked.

Gola who is said to have been at loggerhead with the Youth Minister has now refused to step aside, claiming that Dr. Bol has no constitutional mandate to suspend him.

We are considering the order by the Minister of Youth and Sports as illegal because he has no constitutional mandate to suspend the elected chairperson of the National Youth Union,” Boyoi claims.

“The national youth union is an independent body that has its own constitution and the chairperson is elected and there is no way he/she can be removed by ministerial order.

He went on to say that Dr. Bol is deceiving the public by citing inconsistent articles to justify his order.

“And even he is trying to deceive the public. The articles that he quoted are irrelevant to our constitution or the transitional national government and also the rules and regulations of the ministry,

Gola Boyoi told Eye Radio that he has been working at his office since the day of his suspension.

“That’s why we consider it illegal and I am resuming my work as usual. Yesterday [Friday] I went to the office,” he said.

The letters that the youth minister now claims, have been invented to implicate him, were written in 2020.

The letters allegedly called on the foreign leaders to put more effort into resolving the issue of the contested Abyei region.

The Minister of Youth and Sports was not immediately available for comment.