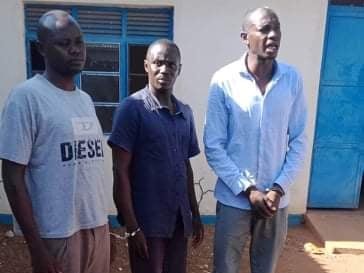 Youth protestors in Aweil town are calling for the urgent trial of the men accused of defiling and killing of a 6-year-old girl in Northern Bahr el Ghazal state.

It is nearly two weeks now since the prime suspect; 42-year-old Saber Abu Sam and two of his associates were remanded in jail for rape and murder of the little girl.

Witnesses say the suspects were caught while dumping the body of the child in a pit latrine.

The sexual abuse and killing of the toddler identified as Abuk led to violent protests in Aweil town.

Some protestors reportedly vandalized shops, forcing traders to close down.

On Friday, a group of youth carried out peaceful demonstrations in Aweil to demand that the suspects be arraigned in court.

“This was a demonstration organized by the concerned youth. There was no specific body, and we are just calling for justice,” Deng Athian Teeng, one of the protesters, told Eye Radio.

“We took a peaceful march to the Judiciary, to the office of the governor, and to the parliament to launch a call for justice,

“This incident has incinerated the whole society and to our dismay, justice has taken time because it was on the fourth and now we are on the 13th of the month and no justice has been administered. The youth decided to take it to the street,

“We are demanding for specific things to be attended to seriously; one is that we are hearing that the case is about to be transferred to Juba and we are saying that we want justice to be administered in the state because we already have a judiciary.”

In response, the national government has promised to ensure the suspects are tried in the court.

A Council of Ministers meeting in Juba yesterday condemned the sexual assault and murder of the little girl.

In a statement to the media, the national Minister of Information, Michael Makuei assured the protestors that the culprits will be punished.

“This is a case that has never happened before, and it is condemned. The government has taken this case seriously. The culprit is a Sudanese,” Makuei said.

“Irrespective of being a Sudanese or anybody, the commission of such an offence itself is a real crime that doesn’t need any mercy and as such the investigation will be expedited and the culprit will be brought to book and tried accordingly,

“We call upon the people who are almost going on a rampage on that case to hold their horses and wait because justice will be done,

“This is an unfortunate case, it is a criminal case and these are the offenses on which sometimes the international community and so-called human rights organizations will hold the government responsible for it.”