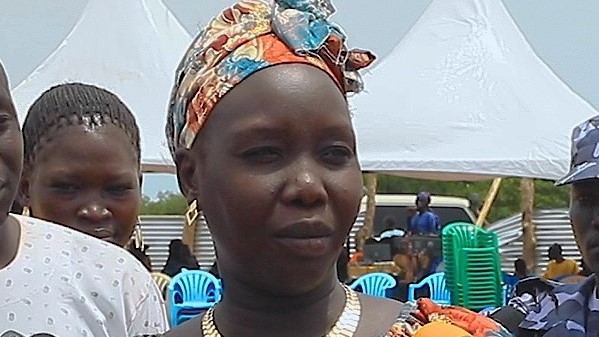 The Minister of Youth and Sports in Central Equatoria State has appealed to young people to embrace sports as a way of promoting peaceful coexistence and cultural diversity.

Rita Dominic Jada made the remarks during a friendly wrestling competition between Terekeka of Central Equatoria State and Bor of Jonglei state on Saturday.

The match ended in a dramatic draw after Bor wrestlers claimed they had run short of participants.

This came after Terekeka wrestlers came from behind to equalize with four consecutive wins.

Addressing thousands of spectators at the Wrestling for Peace tournament, Minister Rita says young people must engage in sports to discourage tribalism.

“Always let’s put sport as a way of promoting peace and love between people. As in sports, there are losers and winners,” Minister Rita told Eye Radio.

“Let’s not think if you lose then you have a problem with the winners or the tribe that won. Because in sports we don’t play as tribes but we just play sports, for example, we have, football, wrestling, and many other sports activities,

“I am encouraging the people of South Sudan to distance themselves from tribalism and let’s use sports as a tool of peace,”

“We have seen people of Jonglei have come a long way up to Terekeka for wrestling. Let’s learn from the spirit of sports which is, that when you lose it is not the end because next time you can win.”

This year’s wrestling competition in Terekeka witnessed a huge turnout of spectators.

Wrestling is a popular sport among many pastoralist communities in South Sudan.

The wrestling competition is mainly practiced by the communities of Lakes, Jonglei, and Central Equatoria.

Editor Note: This news has been edited to correct the error after Eye Radio mistook Central Equatoria State Minister of Youth and Sports, Rita Dominic Jada, with her predecessor. We regretted the error.