You are here: Home  |  Education | News   |   School children take to Malakal streets to back striking teachers

School children take to Malakal streets to back striking teachers 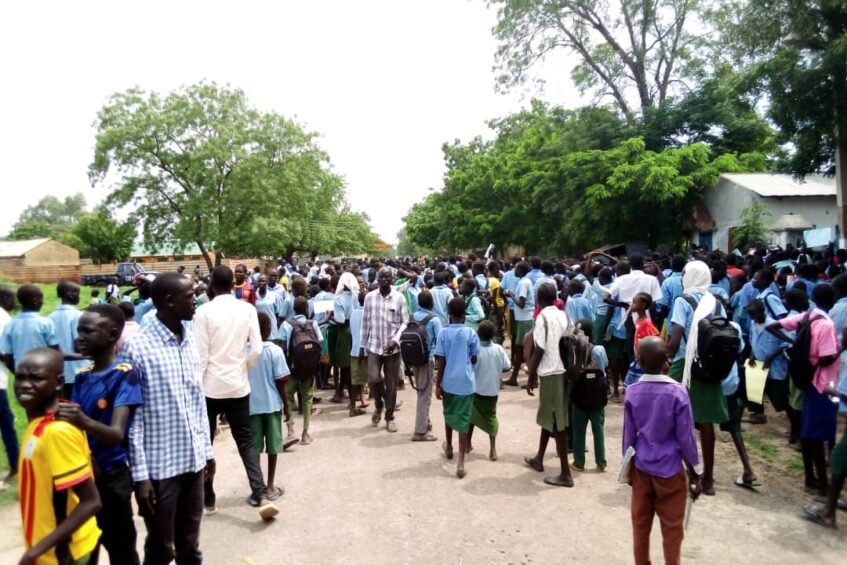 About a thousand school children have staged a peaceful protest in Malakal town of Upper Nile Thursday to show support to striking teachers in the area.

The primary school teachers in the state capital went on strike last week to coerce the government to pay their three months salary arrears for April, May and June.

The teachers reportedly refused to get to work, resulting in the disruption of classes across the state capital.

They said the authorities are sitting on their arrears and have not paid them their dues, days after the money was handed to the state by the national government.

Five primary schools in Malakal town took to the streets Thursday morning in support of the teachers.

One of the teachers who spoke to Eye Radio on condition of anonymity said they went on strike because the government was dragging its feet on the issue.

“Two days back, we had a meeting with the minister of education, and they say you go to the finance to see what will happen but there is nothing, so we just matched as five schools,” said the teacher.

The teacher whose name Eye Radio withheld claimed the state Minister of General Education allocated only 100,000 pounds per each school as an incentive.

“We just make our peaceful demonstrations this morning for our incentive and we are just helping our children because we thought that they are our children, and we are demanding our money and because they use to neglect us, and we always say we will make it and they always just promise us without fulfilling it.”

For his part, the state Minister of Information Luke Sadallah confirmed to Eye Radio the teachers staged the peaceful demonstrations.

“This demonstration happened after I reached my office this morning. I got this news, that students went out because their teachers did not get their salaries for two months,” said Sadallah who did not promise a solution to the issue.

A heavy police presence was seen along several streets in Malakal town this morning.