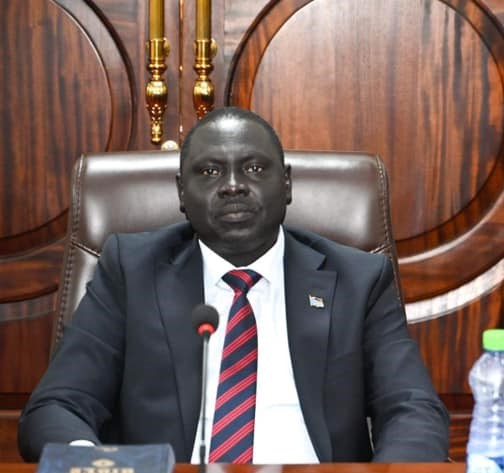 President Salva Kiir Mayardit on Friday directed the new governor of Warrap to stop injustice and ensure that people abide by the rule of law in the restive state.

Manhiem Bol Malek was appointed in a presidential decree on November the 17th, to replace Lt. General Aleu Anyieny – who served for two years since February 2021.

Malek was sworn-in on Friday in a ceremony presided upon by President Salva Kiir, and administered by Deputy Chief Justice Dr. John Gatwech Lul.

Speaking during the oath-taking ceremony, President Kiir urged the newly appointed Governor to restore peace and stability in the restive areas of Tonj and Twic Counties of Warrap State.

“As you take up your new assignment, it is your responsibility to care for all people in the area and give them the right advice. You [must] stop injustices in the state and ensure people abide by the rule of law ” President Kiir said according to a statement from his office.

In recent years, Warrap State has seen a wave of inter-communal violence in the Tonj region and the northern border with the Abyei Administrative Area.

According to a tweet by a local radio station reported that traditional chiefs in the state to initiate reconciliation programs and include young people in his leadership.

Traditional chiefs urged the new governor of #Warrap state to initiate reconciliation program to restore peace and unity among the people. Chiefs also asked Governor Bona Panek to include youths in his leadership. @SSOT_tweets

The newly appointed Warrap Governor Manhiem Malek also acknowledged the crisis in several parts of the state – and promised to restore peace and stability in the state.