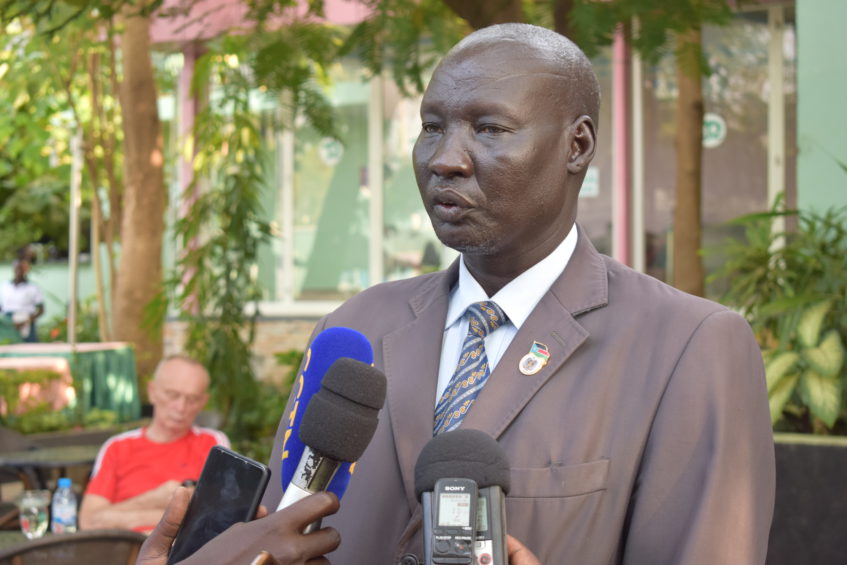 Hon. John Agany, Chairperson of Information Committee at the TNLA speaking to the Media after the launch of Strategic Plan 2021 - 2022 on Saturday 11th March 2022

The Chairperson of the Information Committee at the national parliament has complained about what he referred to as interference by some members of the international community in the affairs of the parliament.

John Agany said he was angered by criticism from the diplomatic corps over the parliament’s recent handling of journalists.

“The constitution of South Sudan is a guiding principle and supreme law and there is no mention of international community intervention with our affairs as a nation,” said Agany.

Last week, the US government condemned the brief detention of journalists by security personnel while covering a press conference at the parliament building.

The reporters from different media houses had been invited by about 19 legislators to talk about the challenges they are facing.

But officers from the National Security Service, under the instructions of the Information Committee chairperson interrupted the press conference and briefly detained 8 journalists, including Eye Radio reporter.

In reaction, human rights groups censured the parliament for restricting freedom of the press and minimizing civic space.

The Head of Political Affairs at the British Embassy in Juba also called on the leadership of the parliament to ensure journalists have free access to the parliament without hindrance.

In response to the criticism, Honorable John Agany said: “You yourselves are journalists and we are speaking freely to you. So I don’t believe there is any barrier and there is a problem but if you interfere a guiding principle of this country as a supreme nation, we will be asking you.”