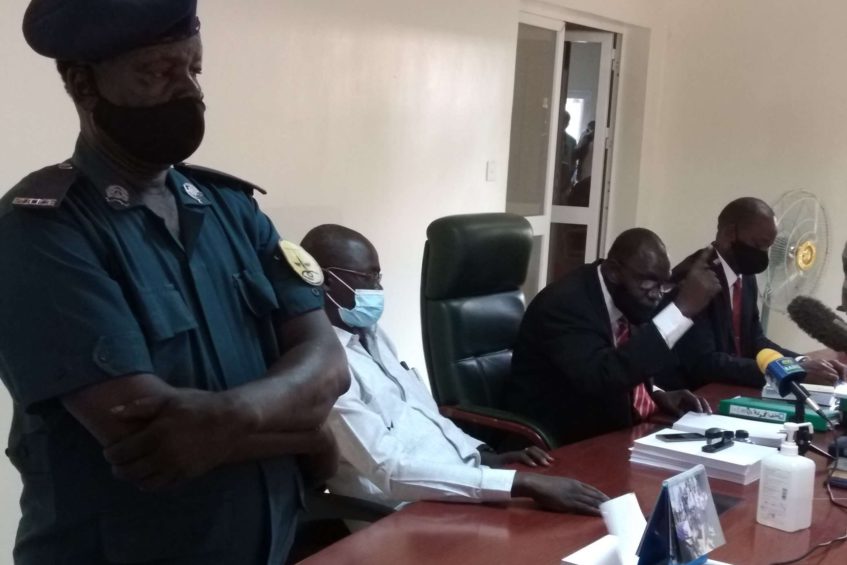 Judge Duoth Kulang: "For the court to operate, the prime suspects must be around.” Credit|Michael Daniel/Eye Radio

Judges of the special court on the Sherikat incident have expressed their frustration over how the public prosecutor and the security organs are handling the case.

“For the court to operate, the prime suspects must be around,” he stressed.

For the last three weeks, the court has not been able to try all 23 suspects because some of them failed to show up in the court in Juba.

The panel of three judges had ordered that all the suspects be arraigned in the court for proper trial to begin.

But two weeks ago, the proceedings could not begin after it was noticed that some of the accused and exhibits such weapons used to commit the crimes were not availed before the court.

The first court season last month was also adjourned after only 4 suspects showed up.

On Thursday, the judges were forced to postpone the hearing again after only 14 out of 23 suspects turned up.

The public prosecutor had informed the court that most of the suspects that were bailed out are nowhere to be found.

For its part, the police told the court that they could not identify the suspects either in prison or trace their contacts.

But to their disappointment, the judges were again informed that only 6 suspects were present.

Those who turned up are classified as Group B. They are accused of killing Lual Akook, an SSPDF officer also known as Lual Marine.

Among them are a renowned military officer, Garang Akook, who attended the court session for the second time.

However, none of the suspects accused of killing six civilians in Shirkaat during the riots in June 2020 showed up.

“The reason for the adjournment is that Group A suspects are absent including court exhibits,” judge Duoth stated, adding that “They are the prime suspects in this case.”

“Secondly, one of the prime suspects is not in the country.”

Judge Duoth Kulang described the absence of the defendants as a deliberate action by people incharge –to disobey lawful court orders.

He blamed the public prosecutor, the police, the military intelligence and the national security service for failing to re-arrest the suspects.

The special court was to confirm charges and listen to findings of investigators into the deadly incident which resulted in the killing of six people last year.

The June 3 incident sparked by an alleged land dispute also resulted in the killing of an SSPDF officer – Lual Akook also known as Marine –who was related to President Salva Kiir.

Following the incident, hundreds of people took to the streets in protest of the killings.

On June 4, the president established a seven-member committee to investigate the incident.