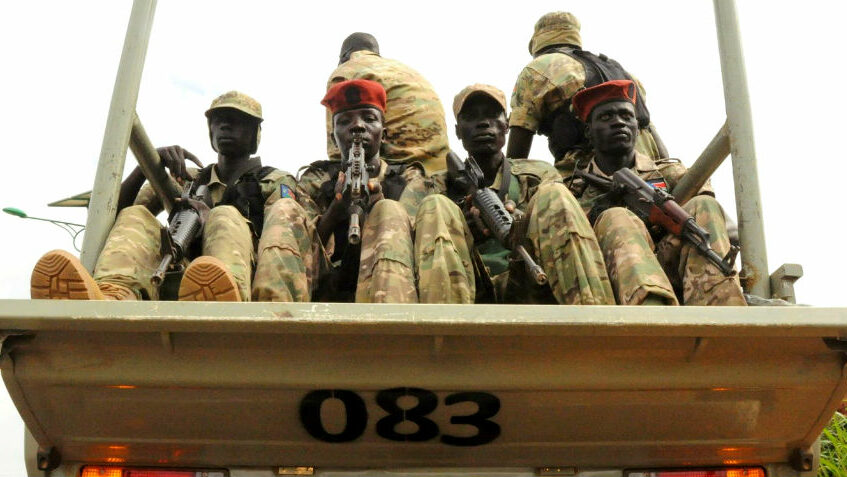 The National Security Service has disputed Human Rights Watch report that it arbitrarily arrests, tortures and operates with near-total impunity, without meaningful judicial or legislative oversight.

On Thursday, the rights watchdog said in a report that authorities have continued to infringe on freedom of expression and freedom of association and assembly, arresting and detaining critics, human rights defenders, and journalists.

It pointed out to the most recent incident, on August 7, in which “police and National Security Service agents arrested and detained seven people, protesting rising cost of living at Konyo-Konyo market in Juba.”

In response, the internal bureau of National Security Service rubbished the report.

“The allegations are inaccurate and unedifying of the stance, operational principles, standards, best practices and the core values as well as ethical conduct and execution of the Service’s mandate in accordance with the constitution and the law,” Kumuri told Eye Radio.

He argued that the NSS is only executing its mandate as stipulated in the interim constitution.

“National Security is among the disciplined law enforcement agency in the country. The alleged statement of the Human Rights Watch is unjustifiable and vilifying in nature.”

“The National Security upholds its moral compass and believes in those timeless ideals, including by affirming that the moral universe is long, but it bends toward justice.”

The watchdog also said it has documented how the agency operates with near-total impunity without meaningful judicial or legislative oversight.

Since 2013, it said NSS has abducted, tortured, and forcibly disappeared hundreds of people on the basis of their ethnic affiliations or in reprisals for their opinions with the clear aim of crushing criticism of those in power.

According to the group, since the peace agreement was signed, the agency has on numerous occasions harassed journalists, shut down media outlets, restricted the media’s ability to print or publish stories deemed critical of the government.

It added that the security agency unlawfully held people in poor conditions leading to deaths in custody.

In the same statement, HRW said South Sudanese leaders have failed to provide clear timelines for the creation and the beginning of operations for a hybrid court, to prosecute the most serious violations since the current conflict began in 2013.

It urged the country’s leaders to address chronic insecurity, rights abuses, and the worsening humanitarian situation during the extended transitional period.