Majok’s burdened life as a widower 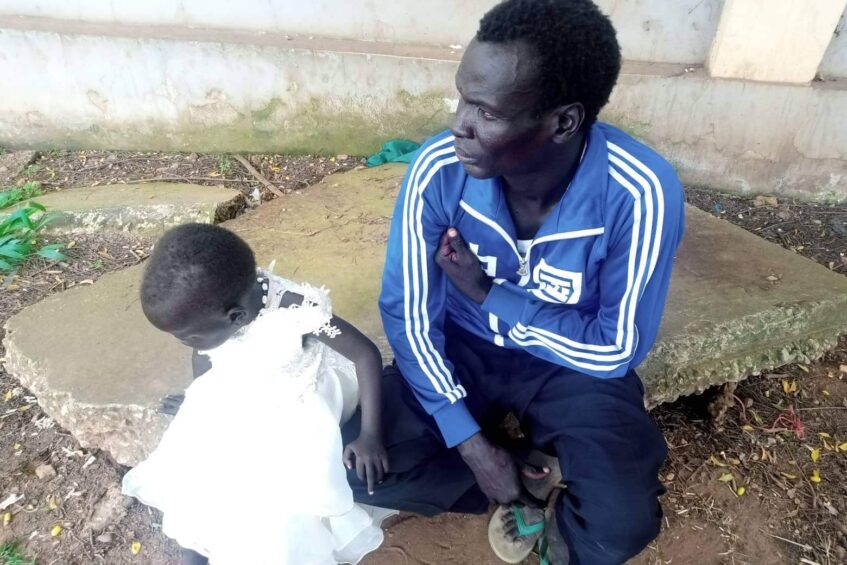 Widowed after the death of his wife, SSPDF corporal Majok Monydhar, 44, begs in Juba streets to make ends meet for his two-year-old daughter. (Photo: Michael Daniel.)

44-year-old Majok Monydhar, a resident of Juba’s New Site residential area narrates how the challenges of life as a widower, pushed him to streets begging to make ends meet for him and his two year-old daughter.

The officer of the South Sudan People’s Defense Force said his beloved wife died abruptly in Juba two years ago.

She reportedly died of heart attack after being misinformed that Majok has been killed in Yei.

“When I heard about my wife’s death, I immediately returned to Juba and found my daughter was taken care of by the neighbors,” he said.

But Majok said he took his daughter away from her care-taking neighbors, citing alleged mistreatment, where she was beaten for having urinated on herself.

Since then, the SSPDF Corporal, whose monthly salary is 2000 SSP, has resorted to begging in the streets of Juba.

Every day, he wanders through extreme weather in the streets of Juba asking money from passers-by and motorists.

“We sit here begging, and if someone offers us pennies, I buy food for her. I spend the day time here and go back home when the sunset,” he said while speaking to Eye Radio.

In many cultures in South Sudan, where men are prohibited from household chores, it is evidently more unbearable to be a widower than a widow.

Men who lost their wives rarely remain widowers and instantly remarry to find someone to take the burdening responsibility of bringing up infant children.

But Majok says he has refused to marry because “I am afraid that someone will come into my life and negatively affect my relationship with my daughter.”

“I can’t trust anyone to better take care of her maybe when she becomes adolescence I’ll rethink.”

He also said he wishes to take his daughter to Warrap where she could be taken care of, by his relative. However he said he could not afford the transport cost to Warrap with his begging income and salary.

“If there is someone to help me now and support me, I will go back to my county to return this child to my family to take care of it,” he said.