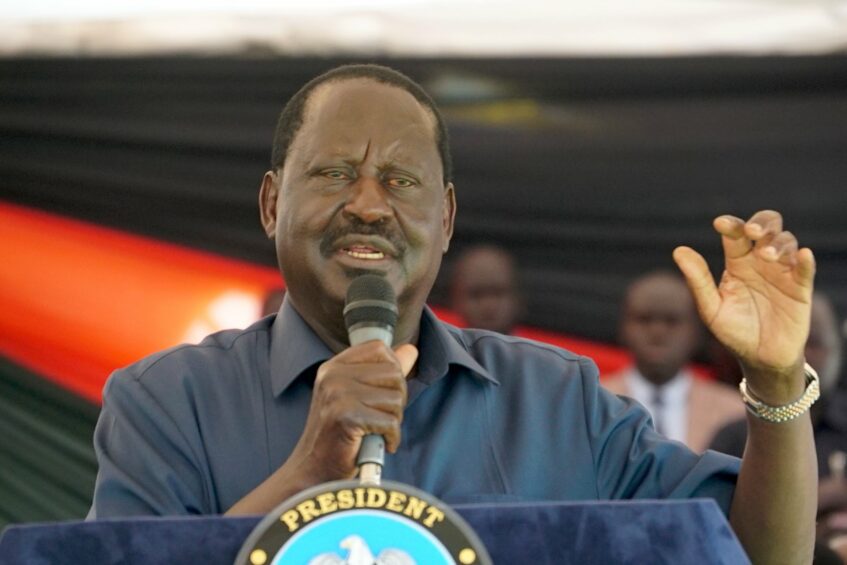 Kenyan presidential hopeful Raila Odinga has pledged to construct a highway linking Juba with Nairobi to facilitate trade between the two countries.

Raila Amollo Odinga who is also AU infrastructure development leader made the remarks in Juba Thursday.

South Sudan is currently on the path to connect Kenya and Ethiopia through a tripartite project known as Lamu Port-South Sudan-Ethiopia Transport (LAPSSET) corridor.

The project was launched in 2013 to enable infrastructure inter-connectivity and easy the movement of goods and services among the three countries in the region.

Once implemented, South Sudan will become a transit point to the Western and Southern Africa countries.

Raila Odinga claimed that if he win the elections, South Sudan and Kenya will have good transport infrastructure.

“If I win the elections, I want us to open the border between South Sudan and Kenya. We….. talk about funding this highway from Juba to Nadapal to Nairobi so that you can access the goods from the Naivasha inland deports”, he said.

“Within a matter of just ten hours you will be there and another ten hours, the goods are back here in Juba and this is what we want do and you can’t come to work to Kenya as a South Sudanese without even any passport just your own ID.”

Two weeks ago, the South Sudan Minister of Transport said the government has started mobilizing companies to kick off the construction of Nadapal-Juba road as part of the regional project.

However, the country’s First Vice President Dr. Riek Machar says South Sudan is committed to ensure that the LAPSSET project is realized.

“Our goods in Juba or in South Sudan are very expensive. Transport cost is big. Mombasa port has become congested. We understand Lamu port is ready that was one project because if we can use it, it will bring prosperity in this country,” said FVP.

“I hope the road you people were planning to build as reach Lokichogio. We are working hard to see that Lokichogio is connected with Juba so that the LAPSSET project is realized.”

The two top officials spoke during the official commissioning of Freedom Bridge in Juba Thursday.