You are here: Home  |  News   |   IDPs in Nimule Rejected by Community, says Official 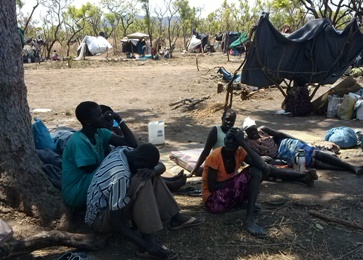 IDPs in Nimule are refusing to be relocated after the community in the area rejected Eastern Equatoria state government’s request for land to be allocated for them.

The head of a committee set up to deal with IDP issues in the state says the number of IDPs in Nimule is overwhelming.

Paska Hivita Oduho, says there are two groups of IDPs in Nimule town. Some are in a camp and some have sought refuge within the community residential areas. She told Eye Radio that there are camps that have been gazetted for the IDPs. “ They said they cannot accommodate them anymore and the best thing we could do as a government is to gazette them a better place, another place where there is no congestion. It would be very soon, we are still trying to talk to our partners especially the IOM for the transportation of these people. It is not easy. We have two camps which are newly gazetted. We have Kor Machi in Kapoeta South and we have Ikotos between Serteny and Ikotos itself. So these are the two gazetted camps for the IDPs.”

Eastern Equatoria state hosts are large number of IDPs with Nimule having the highest number at 35,000 people.