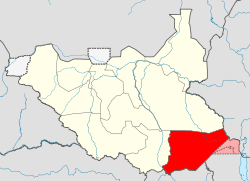 The government of Eastern Equatoria says it has formed a committee to investigate the recent killing of 16 people in inter-communal violence in Budi County.

Last week, at least sixteen people were killed and 40 houses burnt in clashes between two communities of Ng’auro Payam.

“It [the committee] has been dispatched to go to Budi or to the area to find out the incident and also to inquire how the incident happened so that this report has to be brought to the state government in order to take action, immediate action, in order to curb the issue or put the issue to an end,” the state Minister of Information, Clement Laku Chichim, told Eye Radio.

He said the government would apprehend those responsible for the killing.

“Forces have been prepared in order to go there and try to prevent any other escalation of the matter in that area.”

Mr. Laku said that the fighting has not stopped despite two reconciliation meetings held last year in Budi County in a bid to unite the communities.

Last year, 3 people – a doctor, a nurse and a patient – were killed and 68 houses and shops were looted and burnt down in inter-communal violence in Lorema payam of the same county.