You are here: Home  |  News   |   Some 51,000 Internally Displaced Persons in Unity state are in deplorable conditions

Some 51,000 Internally Displaced Persons in Unity state are in deplorable conditions 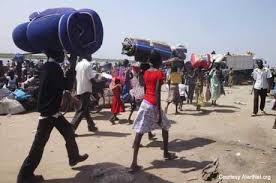 The Minister of Gender, Child, Social Welfare and Humanitarian Affairs says some 51,000 Internally Displaced Persons in Unity state are in deplorable conditions and in desperate need of assistance.

Awut Deng Acuil was visiting Paryang County in the state.

Ms Acuil said that many villages were burnt to ashes, leaving many people homeless, and that all water sources were also destroyed.

She was addressing the media yesterday, during her visit to assess the situation of the IDPs.

“Many people are displaced and there is no food in the area and, to make things worse, there are no connections with other states and with the capital. So the issue of roads and even air transport is difficult to be able to save lives here because the air strip – we have cannot even take five tons of food. So it is a challenge that we have found here,” she said.

Ms Acuil said together with the number of people who were previously camped in the area, the number of displaced persons has now hit 70,000.

She said a number of patients in the hospital in Paryang need urgent medical care, including women and children.