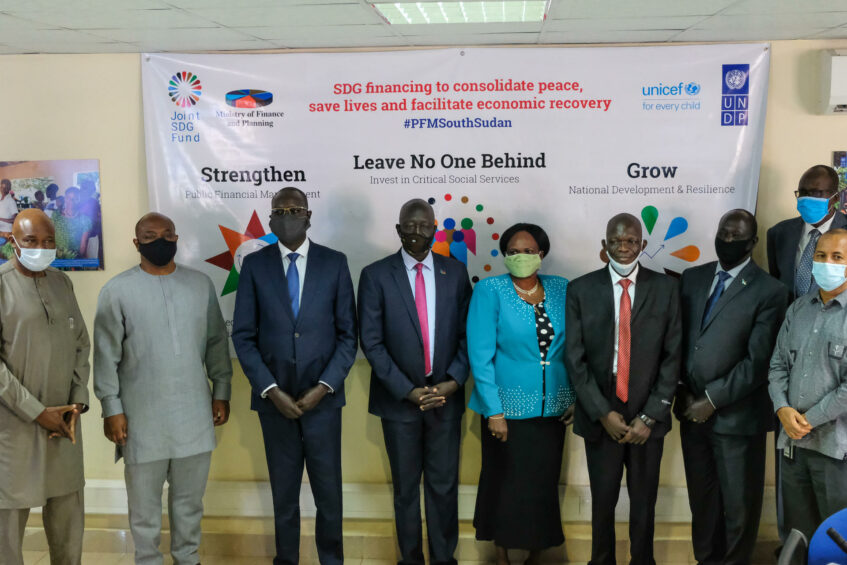 The UN children’s agency, UNICEF has said it has successfully concluded a joint Sustainable Development Goals, a program it funds to strengthen public financial management mechanisms in three states in South Sudan.

The UN-led sustainable development program was implemented in partnership with the Ministry of Finance and Planning, and the National Revenue Authority.

Other partners which were part of the development initiative that has come an end, include the UN’s Resident Coordinator’s Office, UNDP and UNICEF.

The purpose of the joint programme was to increase budget allocations to social service sectors.

It was also aimed to to allocate greater resources to critical social service and ensuring their efficient, effective and transparent utilization to strengthen resilience, social cohesion and benefit all people, especially the most vulnerable children and women.

“We worked on capitulating the state ministries of finance in the three project. We worked on ensuring there is evidence generation and budget transparency in these three states,

We also ensured that the accountability framework, particularly the country transfer monitoring committee in these three states are revitalized and re-instituted after a long period of breakdown,” said Yona.

The capacity building project trained more than 50 each from the three states of Central Equatoria, Western Equatoria and Northern Bahr el Ghazal in the span of 2 years.

The trainings focused on public financial management, book keeping to ensure reports are generated according to the charts of the government.

“If this project is to be successful, it is the simple fact that we have come to the realization that we need to do things according to PFM procedures and rules,

‘When the government had to report back on the international rapid credit facility funds, we saw the target states reported correctly,” he added.

Other 17 institutions in the three states have also benefited from the project through budget trainings among others.

The partners Joint UN SDG Fund, UNDP and UNICEF provided a financial support of over $1 million to the joint programme that ran from 2020-2022 .

UNDP funding is said to have been directed to fighting poverty, inequality, and climate change.

For his part, the state Minister of Finance, Planning in Norther Bahr el Ghazal, Andrew Lual described the training of his staff as successful.

“The training UNICEF and partners conducted to our officials here are very helpful. I have personally opened or officiated many trainings and workshops they conducted here,” Lual said at the conclusion of the project.

He, however, called on Unicef and UNDP to continue with similar support in the near future.

“We hope and urge them to come back and continue with such support to us. Those who were trained are now helping others in different institutions at the county and payam levels,” said the state finance minister.

The Joint SDG Fund supports countries to accelerate their progress towards the Sustainable Development Goals and to deliver on the commitment of the 2030 Agenda to leave no one behind.

The UN’s joint programme has helped in strengthening the capacity of Revenue Authoritities to increase tax revenue in the three states.