You are here: Home  |  News   |   Sudan coup: South Sudanese in Khartoum speak out 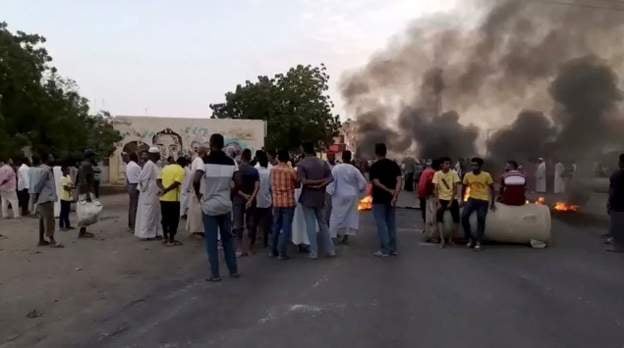 Some of the demonstrators on the streets of Khartoum - Photo credit: BBC

South Sudanese nationals in Sudan say they are living in fear after the military dissolved civilian government and arrested leaders this morning.

Abdel Fattah al-Burhan, a general who headed the Sovereign Council, a ruling body that had shared power between the military and civilians, said the military needed to protect the country’s safety and security.

According to the ministry of information there, Prime Minister Abdalla Hamdok was detained and moved to an undisclosed location after refusing to issue a statement in support of the takeover.

This reportedly prompted those opposed to the military takeover to take to the streets where gunfire and injuries were reported.

In Khartoum’s twin city Omdurman, The Reuters reported that young protesters barricaded streets and chanted in support of civilian rule, though blockages of phone and internet networks appeared to limit their ability to coordinate large gatherings.

There are, the UN says, over a million South Sudanese in Sudan, some of whom are students and refugees.

Reacting to the developments in the Sudanese, some South Sudanese who spoke to Eye Radio from Khartoum expressed their concern:

“We left everything to God, God, they have cut off communications and the Internet unless someone called from abroad. We are in a bad situation these days,” one of the South Sudanese citizens living in Khartoum said.

“People are just walking on the streets waiting for the army to announce. Most of the people are currently heading to the army barracks and no one knows what is happening,” another person told Eye Radio.

“They are demonstrating and they have closed the streets, but no one can do what is happening.

“The security situation in the neighborhoods is normal and calm, there are no clashes. Most people are on the streets and there is a heavy security presence.”