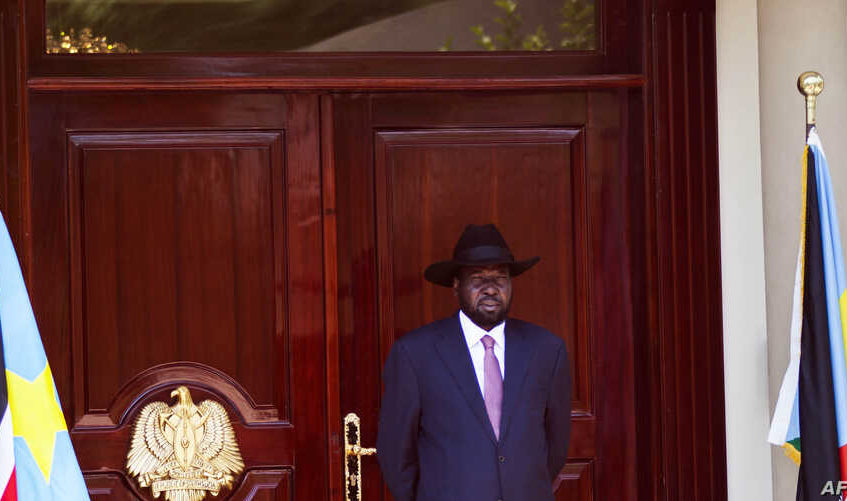 President Salva Kiir waits for visitors infront of his office at the State House in a past function. Credit|AFP/Albert Gonzalez Farran

The Ministry of Health has announced the first jab of the coronavirus vaccine –to kickoff the campaign –will be launched tomorrow at the State House, J1.

“The reason we are doing it at J1 is to show the leadership there,” it declared.

It is not clear who at J1 will be the first person to take the vaccine.

But the Ministry of Health says someone within the Presidency will have to do it to build confidence around the COVAX-provided AstraZeneca vaccine.

South Sudan secured the first 132,000 doses of the coronavirus vaccines that arrived in the country on Thursday.

The AstraZeneca vaccines were delivered through the Gavi COVAX Advance Market Commitment.

It is a global initiative to support equitable access to coronavirus vaccines.

The first batch is part of the 2.4 million doses that South Sudan requested from COVAX.

The government said the first beneficiaries will be frontline health workers and elderly persons, mainly those above 60.

It will also be given to people with underlying conditions such as cancer, asthma, and heart disease, among others.

According to health officials, the launch at the State House will boost public trust in the treatment.

“Who is going to be in the front line, we are going to see it there. But people who at J1 these are those at the presidency and the high office,” said Dr. Richard Laku, Covid-19 Incident Manager.

All the Vice Presidents, except President Kiir, have in the past months contracted the coronavirus.

“So we will see some leadership there if you go tomorrow.”

Each person will first receive 0.5 militre and the second jab after eight to twelve weeks.

For a 12 million population in South Sudan, only 732,000 AstraZeneca doses have so far been approved by COVAX because it said the demand for the dose globally is high, and the production is low.

Some neighboring countries such as Kenya, Rwanda and Uganda have already started the vaccination.

President Yoweri Museveni, Uhuru Kenyatta and Paul Kagame have all been seen publicly taking the vaccine.

Coronavirus cases in South Sudan have continued to rise.