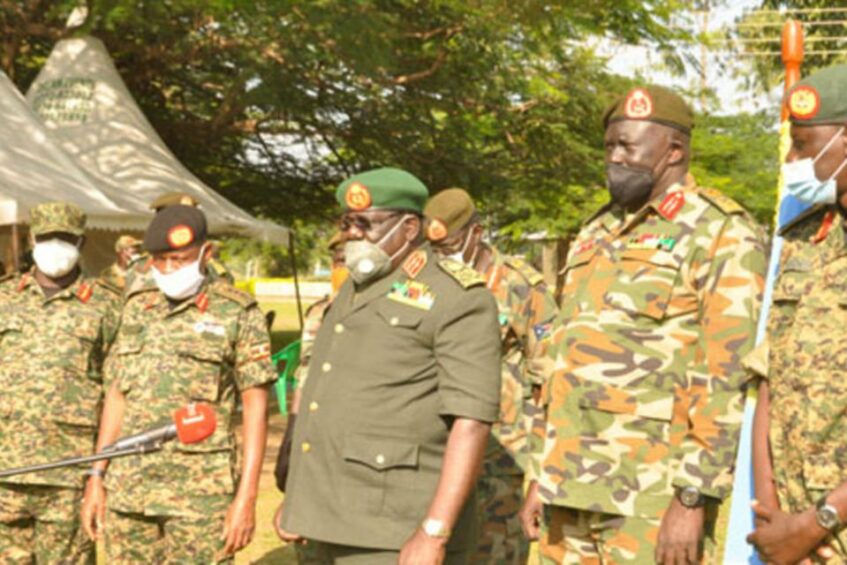 The national army, SSPDF and Uganda’s UPDF have agreed to form structures and share intelligence, on elements of opposition groups, allegedly hiding in their respective countries.

Ugandan newspaper, Daily Monitor reports, that UPDF and SSPDF will share information on the activities and whereabouts of the National Salvation Front, allegedly disguising as refugees in Northern Uganda.

The two armies will also share intelligence information on the rebel movement, Uganda National People’s Liberation Armed Forces, which is said to be operating in South Sudan’s territory.

The military officials held a closed door meeting at the UPDF 4th Division Headquarters in Gulu City on the weekend.

Daily Monitor understands that the SSPDF made a claim that some Ugandans cross to South Sudan under the guise of doing business only to join the National Salvation Army.

When they encounter resistance, then they flee and hide in Uganda disguising as refugees, the newspaper cited SSPDF official as saying.

Later at a press conference, Ugandan military chief, Gen Mbadi said the agreement comes following the spill over of the UNPLAF and the NAS activities into Uganda and South Sudan.

“We have agreed to work together to make sure whatever insecurity affecting the two counties is dealt with through sharing of information,” said Gen. Mbadi.

He reiterated that Uganda will do everything in its capacity to promote security in the region through cooperation.

“Where necessary, joint operations against the negative groups and also being strict on refugee influx because some of the guys who pretend to be refugees are combatants,” he added.

For his part, Lt. General Koang Chuol said they will work with the UPDF to ensure that rebels disturbing peace at the border are defeated.

“I am happy to discuss these issues with Uganda and if we are willing to solve the problems of our borders, we shall end these conflicts,”  he said.