You are here: Home  |  Economy | Featured   |   After eviction, Lubang now a blossoming entrepreneur 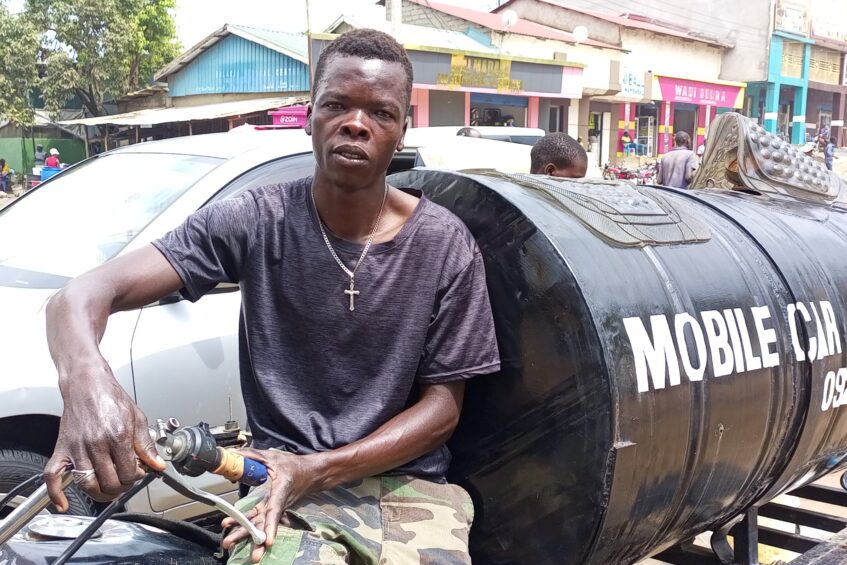 Friday Joseph Lubang talks about the tough times when life used to beat down on him and a handful of his struggling colleagues.

They used to be car washers behind the premises of Malakia Maternity Hospital, until the hospital asked them to vacate one of the few places good for car-washing business, under unclear reasons.

Following their eviction, the 26-year-old father of two introduced his own unique car wash business, or rather ‘Mobile Car Wash’ in March.

“Since, when I started my mobile car wash, there are places I never knew or thought of accessing but now I have reached all those places,” Lubang told Eye Radio in an interview.

Out of handwork and determination, Lubang said the innovative idea has earned him enough income to raise his living standard.

“Those people around Hai Neem and here in the market [Malakia] are calling me to go and wash their cars.”

Lubang owns a tricycle, locally made to carry a tank of 600 liters of water which he uses to wash the vehicles once he is called.

Below the painted black water tank is an automatic pressure washer fixed on the metallic bars.

On the bottom of Lugang’s cargo tricycle water tank is a cell phone number written in white color and is visible to customers who need his service.

“Sometimes somebody with a single car can call me but when I go, I will find four to five vehicles there and I will wash all of them,” Lubang revealed to Eye Radio.

For motorcycles, Lubang said he is washing at less than 1,000 pounds per each.

As a startup business, Lubang said he spent over 400,000 pounds to locally fix the cargo tricycle as a Mobile Car Wash.

The startup cost was part of the savings from the previous car washing business.

Reports suggest that car washing in many countries is incredibly lucrative for businesses but tends to require more startup capital and permits to get started.

It further states that the mobile car wash business is much simpler to start and can become profitable quickly.

Like other cities in the region, driving in Juba is the most common form of commuting where motorists tend to keep their vehicles clean and shiny.

Car owners believe that a deep clean from a car wash is the key to making their vehicle look great.

Lubang’s Mobile Car Wash innovative idea according to him is critical because it enables him to pay school fees for his five-year-old daughter, pay medical bills and put food on the table for his family.

“This work is helping me a lot, paying school fees for my daughter, and paying the medical bill for my family. It is also helping me whenever we have family gatherings, I can contribute with some money and other things,” he added.

Entrepreneurs in South Africa say mobile car wash is a great way to enter the medium and small enterprise industry while making a lot of profit.

They believe that the car wash business has served as the starting point for a lot of entrepreneurs and works both in the formal and informal sectors.

“If you manage to get any casual work, please do it. If you are earning something, don’t use all that money and say you are ABCD,” Lubang stressed.

To get into the mobile car washing industry, Lubang was inspired by his friend who witnessed how Lubang was struggling to put food on the table for his family.

Salah Karkaba who once lived in the US said Mobile Car Wash is a source of income for many young people across the United States.

Karakaba however is appealing to the government to empower young people struggling to create jobs for themselves.

“People have to be positive. There are a lot of ideas for kiosks but we need some help from local government, from the state government to come up with the idea and loans because for James now what he did in the Mobile Car wash business is not that easy and it is not that hard,” Karakaba added.

“I am very happy, we still have a lot of ideas we can help our young brothers.”

Despite ending up in Primary six, Lubang is determined to own a truck and buy other modernized car washing equipment.

This, according to him, will help create jobs for other young people of his age.