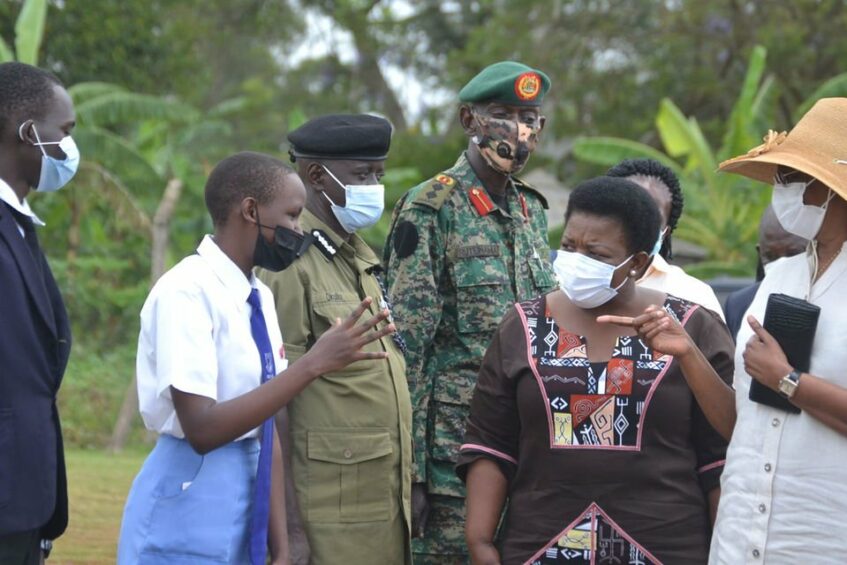 The Minister of Education and Sports, Ms Janet Museveni (right), and Minister for General Duties Ms Justine Lumumba Kasule (2nd right), speak to some of the students during the life skills summit at Wanyange Girls Secondary School in Jinja City on Thursday. Photo : Daily Monitor).

Uganda education minister Janet Museveni has applauded hundreds of secondary school students in Busoga, who have committed to remain sexually pure until marriage in a bid to curb teenage pregnancies.

The students pledged their allegiance by signing and displaying ‘True Love Waits’ cards at the end of a two-day life skills summit.

“Keep that card until that day of the marriage ceremony and hand it over to your partner so that they know you have been trustworthy and they can continue trusting you in your marriage,” First Lady Museveni said, adding, “Hope you mean what you have signed. Keep it to remind you that you made a covenant to God first and then to yourself, your future spouse and family. Please don’t let that be a joke.”

The excerpts of the ‘True Love Waits’ card signed by female students read: “I am a girl and I believe that if a boy loves me, he must be willing to wait for me. Therefore, I have made a commitment to: God, myself , my parents, my future mate, and my future children to stay sexually pure until the day, I give myself to my marriage partner in a covenant marriage relationship. So help me God.”

Ms Susan Ngongi Namondo, the UN resident coordinator, urged the learners from the 37 secondary schools who had signed the cards to remain committed to them until on the day of their marriage.

Ms Justine Kasule Lumumba, the minister for General Duties in the Prime Minister’s office, re-echoed the remarks of the First Lady by urging the students to be true to the pledge made.

Ms Museveni explained that in December last year in response to the Covid-19 challenges, the government—in partnership with Unicef and United Nations Population Fund (UNFPA)—launched the national campaign to protect the girl child against defilement cases and teenage pregnancies.

Mrs Museveni told the students to guard their bodies jealously and avoid sexualising them.

“It’s God who created sex, but also gave it time. It’s not supposed to be done by children. You have a programme right now in the school. You are not here to start a marriage or to start having children. You are here to have education in order to start preparing for your future,” Ms Museveni said.

The First Lady described the sexualisation of young bodies as a “global agenda” and said it can be “evidenced in the morality, entertainment events that have permeated schools and society.”

Data from the District Health Information System indicates that 31,565 teenagers get pregnant monthly. This means that 1,052 teenagers became pregnant daily, with a startling 44 of them getting pregnant every passing hour.

Ms Deborah Basekanakyo Wesonga, the head teacher of Wanyange Girls School, in her remarks, asked the First Lady—in her capacity as the Education minister—to consider constructing a better science laboratory for the school. She reasoned that the current laboratory is too small and old fashioned.