You are here: Home  |  Featured | News   |   Inside Lisok James’ poetic fight against GBV 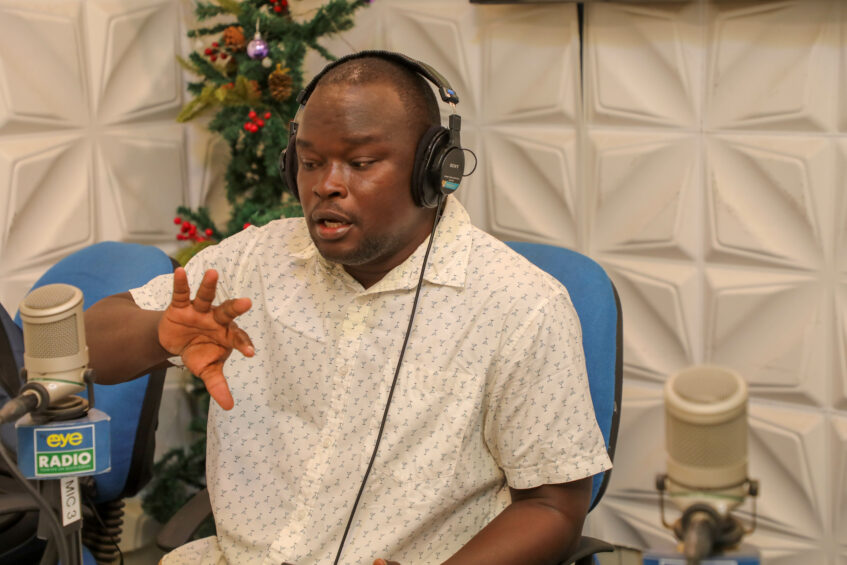 Lisok James, 31, is a South Sudanese Poet who uses his poetry to create awareness against gender based violence in the country. (Photo: Credit: File photo).

31-year-old Lisok James uses a distinctive style and rhythm method known as poems to enhance his campaign against domestic and other forms of gender-based violence in the country.

Born and raised at Mungula Refugee Camp in Uganda’s northern district of Adjumani, Lisok found passion in advocating against GBV – a vice commonly occurring in the camp.

“We grow up in the refugee camp [and] these cases were rampant, and you know GBV is triggered when a man in the family cannot support the family as expected.” Lisok said.

“You will find that at the middle of the night or just early in the evening, a woman is crying somewhere because she is fighting with her husband,” he added.

According to experts, Gender-Based Violence is an act committed against a person’s will and is based on gender norms and unequal power relationships.

It encompasses threats of violence, force and can be physical, emotional, psychological, or sexual, and can take the form of a denial of resources or access to services.

In some communities, Gender Based Violence perpetrators consider it an accepted part of their cultural practices.

The most commonly reported forms of GBV in the country are early and forced marriage, domestic violence and other denial of women’s right to property ownership.

Lisok said the rhyme and style of his writing helps in transforming the mind set and attitude towards women and girls.

He also said poetry has a powerful influence in eradicating gender-based violence.

“My poetry is straight forward because I am against gender-based violence being perpetrated on either woman, girls, children and even men.” Lisok added.

Lisok is currently leading an advocacy campaign under the slogan; “Bakery Series! Respect of Women’s Bodies After Giving Birth! No to body Shaming!”

In his poem titled “I owe you”, Lisok uses an idealistic word that illustrate the importance of a woman in the society.

“Like gold and diamond, you’re married to the depth of the earth, and never eluded in thine value. To you – it doesn’t matter what they say. The world surely owes you. To the ach for your love, let gluttony of truth be my portion,” read excerpts from his poem.

He continues: “For I’m already indebted to the, you – in you, like the warmth from the huddles of fire and woods in the winters. Forever shall I owe you the truth because truthfully, I owe you – nothing but the truth. I OWE YOU” reads part of his poetry.”

The laws of South Sudan provide for the protection of women and girls against discrimination, forced marriage and gender-based violence.

But according to the UN development agency – UNDP,  the important legal provisions are often misinterpreted or ignored.

This results from the desire to adhere to customary norms and the weak state of the rule of law institutions, the agency says.

“It is important that legal professionals, human rights defenders and the public are familiar with provisions relating to the promotion of gender equality and prevention of gender-based violence,” said UNDP in 2017.

In July 2020, the Vice President for Gender and Youth Cluster Rebecca Nyandeng De Mabior called on local leaders to help her stop harmful traditional practices that hinder women from progressing.

Nyandeng said the culture of impunity must stop, when it comes to violence against women.

Poet Lisok, who spoke to Eye Radio said he uses the art to advocate for the rights of women, girls and elderly persons “because these are the most vulnerable people in the community.”

“I believe in putting my pen on a paper to see that I pass an information that at least in our society.” Lisok said during an interview.

Eye Radio has been reporting on gender issues and crimes against women and girls.

Some of the incidents including rape and gang-rape against women and girls, sometimes as young as 8-year-old were commonly reported in several residential areas of Juba, between 2015 and 2020.

The perpetrators are commonly identified as gunmen who barge into houses at night, to rape and loot at gunpoint.

“Awareness of gender issues in a country like South Sudan, where sexual assaults are frequent due to war and trauma, helps the government and organizations to play their role.” says Michael Daniel, a GBV reporter for Eye Radio.

“Many of the gender issues I have covered show that most of the victims are female students, which is reflected negatively in the efforts of the government and partners to bridge the gender gap.” Daniel added.

The government and partners have since inaugurated a Gender-Based Violence and Juvenile Court in Juba to try culprits of sexual violence.

After its establishment in December 2020, the GBV and Juvenile Court has so far sentenced nearly 200 men to different prison terms for committing sex crimes.

According to Eye Radio reports, most of the cases are of defilement and rape.

“Many gender-based violence survivors lost hope in finding justice because they knew there was a specialized court in this field, but it was my turn to inform them about what the court is doing to restore the victims’ rights.” He added.

In December last year, there was a sharp rise in cases of sexual violence, with the Gender-based Violence Center at Juba Teaching Hospital registering 29 cases of sexual assault in one month alone.

Most of the incidents were reported in Gudele, Gumbo Sherikat, and other areas within the capital.

Health official at Juba Teaching Hospital told this media outlet that the cases involved physical assault, defilement and rape among women and girls.

Despite the significant action against GBV perpetrators, activists believe the actual figure of GBV cases could be by far higher.

Survivors of Gender-Based Violence said in media reports, that they have lost trust in the police force, which, according to them does not take sexual abuse allegations seriously.

They say in some cases, police officers question the accuracy of their testimonies.

However, the Deputy Spokesperson of the South Sudan National Police Service on Wednesday this week reiterated their commitment to ensuring GBV survivors access to justice.

James Dak Karlo said with the help of the partners, they have established 21 Special Protection Units across the country to respond to GBV cases.

“With the help of our stakeholders, we have the department called Special Protection Unit, we have done some training in regards to advocacy and reporting with our social one-stop center in the areas.” Dark was revealed during an interview.

James Dak went ahead to say “we have a great contribution now with one of our donors trying to build for us a safe house for those who are victims or survivors of gender-based violence.”

The Inspector-General of Police encouraged the public to report suspected cases of gender-based violence including rape to the nearby police station.

“As women, girls and children, you are saying rape cases are happening in the country, but if you don’t report them to the police, how are we going to know?” Asked Gen. Majak Akech.

Upon conviction, the law says he/she shall be sentenced to imprisonment for a term not exceeding fourteen years and may also be liable to a fine.