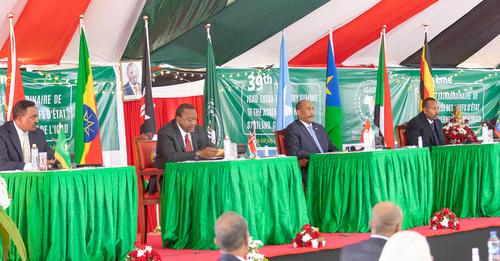 IGAD Heads of State during the 39th Extra-ordinary Assembly in Nairobi, Kenya/ Photo/Courtesy

The Kenyan President says the regional body IGAD will hold a special summit on South Sudan to assess the status of peace implementation in the country.

In a statement on his Facebook page on Monday, William Ruto said he has spoken with the President of Sudan, Abdel Fattah Al-Burhan, who is also the Chairperson of the IGAD Assembly of Heads of State and Government.

Ruto and Al-Burhan reportedly discussed the security situation in the region, especially in South Sudan.

“In his (Al-Burhan) capacity as the Chairperson of the IGAD Assembly of Heads of State and Government, we further deliberated about the security situation in the Eastern Africa region, and specifically in South Sudan,” Ruto said.

“We committed to hold a special IGAD Summit focusing on South Sudan before the end of this month to assess the status of implementation of the Revitalised Agreement on the Resolution of the Conflict in the Republic of South Sudan and address any emerging issues.”

According to the Kenyan president, the meeting in South Sudan will take place before the end of this month.

However, he did not mention where, and on which date the meeting will be convened.

According to him, President Kiir has appreciated his efforts in the search for durable peace and in delivering humanitarian assistance to the affected communities.