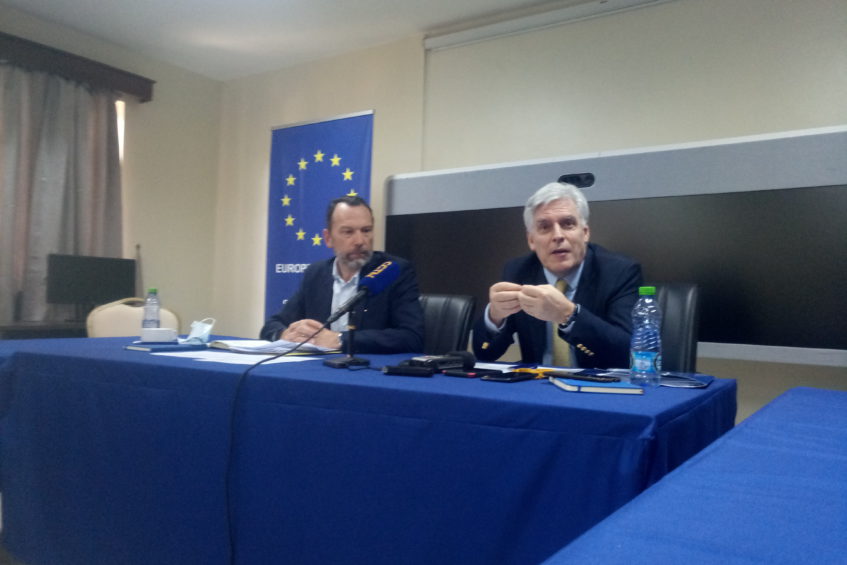 EU and French Ambassadors to South Sudan, Christian Bader, and Marck Trouyet during a press conference 14.02.2022/ Photo by Wote Charles.

The European Union Ambassador to South Sudan has expressed doubt of the possibility to conduct a credible general elections next year.

“I am not completely sure because for this, you need an environment, in fact a lot of things,” Ambassador Christian Bader said.

The September 2018 peace deal obligates the unity government to hold elections three months before the end of the transitional period to establish a democratically elected government.

As per the resolution of the 2013 conflict, the citizens are supposed to go into polls next year in June.

Despite delays in the implementation of some key tasks, President Salva Kiir in November last year told the citizens that the much-anticipated general elections would take place as planned.

The remarks followed his August 2021 statement when he affirmed his commitment to the conduct of the general elections at the end of the transitional period.

The head of state said there was an urgent need to complete all the provisions of the revitalized peace agreement before 2023.

But in his remarks during the 5th Governors forum in Juba last November, First Vice President, Dr. Riak Machar said there would be no fair and free elections in 2023 unless key provisions in the 2018 peace deal are fully implemented.

These include the unification of the former warring forces, repatriation of the refugees and displaced persons, conduct of population census and development of a permanent constitution for the country.

In addition, the Political Parties Act of 2012 must be reviewed and approved by the parliament to enable free and democratic registration of political parties in South Sudan.

Despite the slowness, President Salva Kiir insisted that the country would conduct general elections in 2023.

But in what appeared to be a response to Kiir’s statement, Dr. Riak Machar and Vice President Rebecca Nyandeng said implementing the security arrangements was critical for a free, fair, and transparent elections.

In his media address to media on Monday Ambassador Christian Bader said he is yet to get convinced the country is ready to hold elections next year.

“I don’t know, I don’t want to say that. What you need to have election is just one thing – proper environment, “he said.

He was echoing the popular calls to restore a permanent peace.

For him, unifing the army, giving space, granting freedom of expression and prioritizing infrastructural development among others, are prerequisite to holding free and fair elections.

“This is one thing we are trying to work on, that means people need to be able to have political parties, they need to have minimal freedom of the press and you need to have all the environment to enable who makes a debate possible.”

The rights body is concerned about the slow peace implementation and increased violence across the country.

South Sudan will mark the second anniversary of the formation of the Transitional Government on Tuesday next week.

The AU Peace and Security Council is expected to visit South Sudan on the day to what it said pay solidarity with the people of the country and encourage the peace parties.