You are here: Home  |  Uncategorized   |   Each Al-Hilal player rewarded piece of land for wining SSD Cup 2022 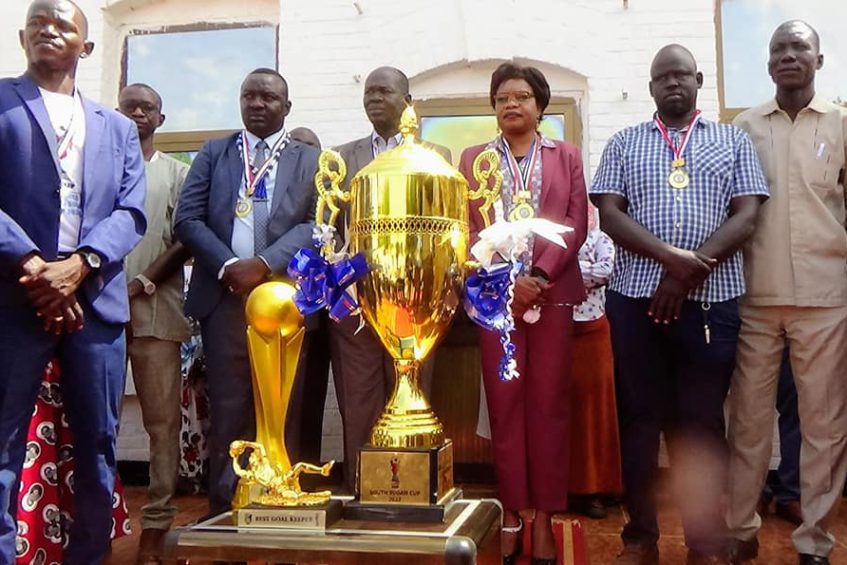 WBS Governor, Sara Cleto ( second to left) during the handing over of the SSD Cup 2022 to Al-hilal FC in Wau / Photo @Baf Kuol

The governor of Western Bar-el-Ghazal state has rewarded plots of land to Al-Hilal Football Club-Wau players after their last week’s victory over Zalan FC-Rumbek in the South Sudan Cup 2022.

Each team member has received a-400 square meter plot in the state capital, Wau.

Al-Hilal Football Club-Wau beat Zalan FC-Rumbek 2- 0 to become South Sudan Cup champions for the first time since inception of the tournament in 2012.

But their second major trophy after the South Sudan National League in 2018.

Over the ten years of the tournament, the finals were dominated by Juba-based teams.

However, the two teams which clashed for the championship this season come from the two towns of the Bahr-el-Ghazal region, Wau and Rumbek.

She said the price is to promote sports in the country and appreciate the team for bringing a victory home.

“We did on behalf of the government and gave them pieces of land, they are like about thirty of them from the team. That’s, I just want to say thank you for the efforts that you have made and this made us proud,” she said.

Governor Cleto explained the idea of giving out the plots of land to the young people instead of cash, saying
“this is to encourage the young generation as a number of them are already becoming independent and it will be an opportunity for them to have a piece of land to build their homes and start a family.”

if they have families then will move their families into their own land, but also that is encouraging sports and what I also mentioned to them I would like them to be inspired so that can also inspire the younger generation for the future.

The winner of this tournament, Al-Hilal, will now represent the country at the CAF Confederation this year.