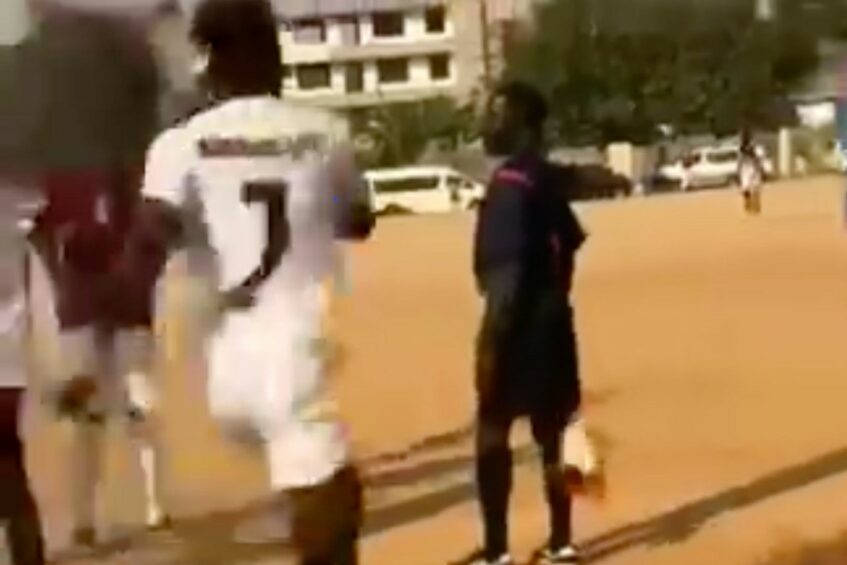 Photo captured from the footage shows Al-Zubair Bakhit smacking assistant referee Robert Sandy and knocked him down at Juba One Playground.

The arbitration committee of the Juba Local Football Association has imposed a ban on second division league player Al-Zubair Bakhit for attacking an assistant referee during a match on Thursday.

Black Eagle player Zubair Bakhit violently smacked the line-man Robert Sandy and knocked him down at Juba One Playground.

In the 9-second video footage shared on social media, Mr. Bakhit is seen punching his teammate who tries to  hold him back from attacking the referee.

Bakhit’s outburst was allegedly as a result of a goal that he believes the lineman would have flagged as offside.

The Black Eagle players had also demanded a penalty kick that the officiating referees did not grant.

After Al-Zubair Bakhit reportedly made some offensive remarks, the central referee Mustafa Scholl then red-carded him, before he assaulted the assistant referee.

The match was eventually cancelled in the 18th minute and Buffalo were awarded the three points against their opponents.

It is the third on-pitch violence involving a sportsman in the country, in three months.

In November 2022, Wau Local Football Association in Western Bahr el Ghazal expelled two Al Ahali FC players who assaulted a female referee and suspended their coach along with five colleagues for misbehaving during a Sunday competition.

A month later, Yambio Local Football Association penalized and suspended a football player for two years after he assaulted a referee in the capital of Western Equatoria State.

Al Salam FC player, Simon James attacked referee Samen Makawa after he was sent off for misconduct during a match on Sunday.