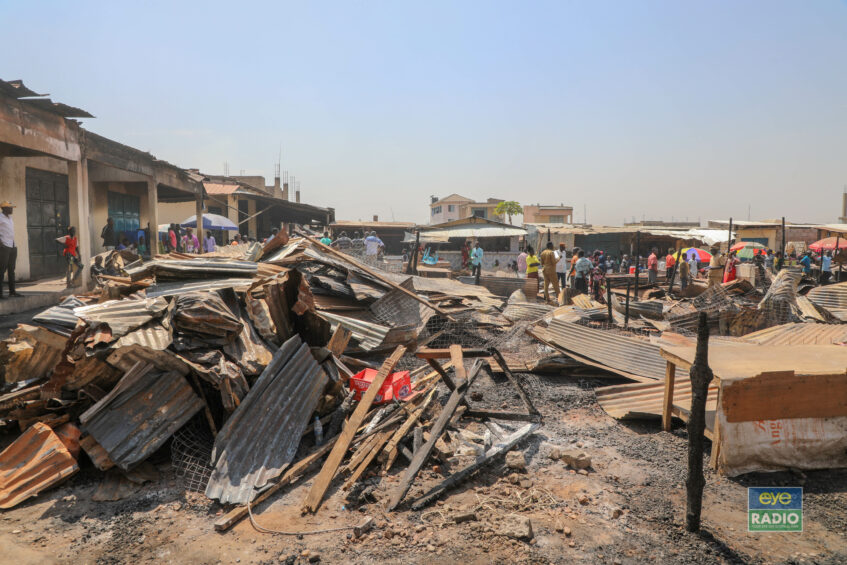 The Chairperson of the Chamber of Commerce at Jebel Market has applauded foreign water tankers for putting off the fire that gutted nearly 20 shops in Juba on Wednesday.

Sebit Angelo said the market would have been gutted in the late evening fire, had it not been for foreign water suppliers – mainly from Ethiopia and Eritrea – who have come to help during fire outbreaks.

We give thanks to the Habash water tank drivers. Last night we called them, and they are the ones who came and brought eight full water tanks that helped us to put out the fire,” said Angelo.

The water tank drivers attended to a blaze that razed through 17 shops at the Jebel market in Juba on Wednesday night.

Sebit says fire fighters of the Civil Defense Service officers could not immediately arrive to arrest the situation.

“Nothing was stolen because we stood by them. I would also like to thank the joint operation division here in the Jebel area they came with cars and the police forces.”

Fire outbreaks, mainly in markets, are commonly reported specially during the dry season.

In December last year, fire also devastated shops in the Gudele-1 area and quickly spread through a large section of the area.

Days later, traders at the Custom Market of Juba counted losses in goods worth millions of South Sudanese Pounds after fire gutted 62 shops.

Police have registered at least three fire incidents at the Custom Market alone.

The fire brigade department of the Civil Defense Service has been criticized by members of the public, for doing less or nothing about fire outbreak mitigation and control in the city and other towns across the country.

On his part, the deputy chairman of Jebel market, Issam Rabih told Eye Radio that without prompt response from the foreign water takers – better known as Habash – the fire could have burnt down the whole of Jebel market.

“We called the fire brigade, but they came too late and their cars had very little water so we blame them for that.”

“But the Habash (Ethiopian), helped us to put out the fire. Usually, when a fire breaks out at Jebel market and this is the fourth one, it is always the Habash who helps us more than the fire brigade.”

“We direct our blame on the fire brigade authority, they take money from the traders for fire extinguishers and certificates but when such an accident happens, and they are called, they delay a lot and even when they come they have little water in the tank.”

The National Civil Defense Service is yet to comment on the matter.

According to the 2011 constitution, as amended, the Fire Brigade Service – now Civil Defense Service – is tasked with preventing and protecting the people of South Sudan and their property from fire and disasters.