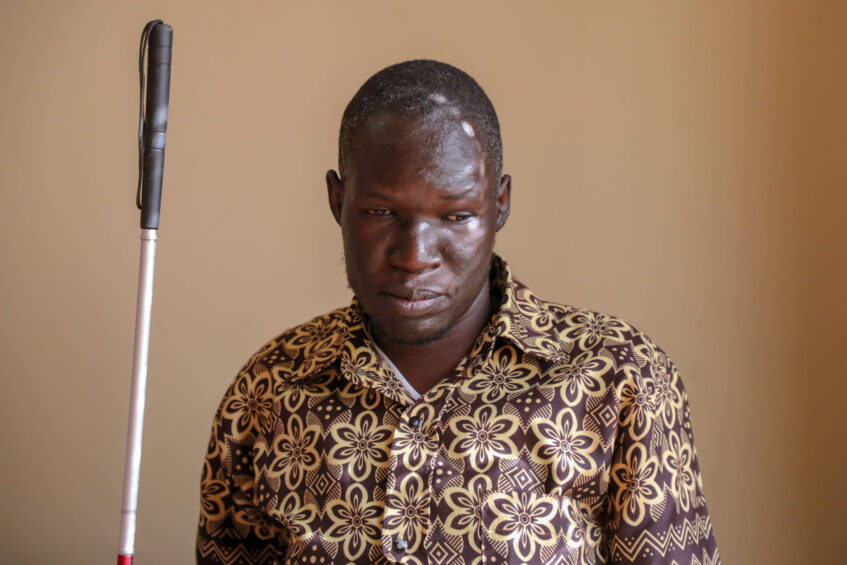 Anthony Pitia Modi, one of the teachers at the Rajaf educational center for the blind - Credit: Lou Nelson/Eye Radio - 4th Jan. 2023

A visually impaired teacher in Juba has called for an inclusive education policy in the country to consider the needs of people with disabilities.

Anthony Pitia Modi – who is a teacher at the Rajaf educational center for the blind – says learners and teachers with visual impairments are not being fully catered for by the government.

He called on the National Ministry of General Education and Instruction to provide braille textbooks to ease their learning in the schools.

“We are saying the curriculum of South Sudan is not inclusive because the issues of persons with disability generally, and visually impaired in particular, are not being taken care of by the ministry of education,” said Pitia.

“For our case here, we are supposed to get our textbooks Brailled right from the general ministry of education and instruction because they printed some textbooks in print from sighted pupils or students, then why not for the visually impaired,

“We have met these government officials several times, but nothing has been materialized for the visually impaired.”

Anthony Pitia went on to say that South Sudan has limited access to a Braille system that enables the visually impaired to read and write.

“I want to send clearly to the leadership of the ministry of general education and instruction, let them also consider the transcription of textbooks into braille so that teachers or learners with visual impairment can also benefit from that one,” Pitia said.

“These textbooks, if they are not transcribed, it is very hard for a teacher who is visually impaired to come and prepare his or her lesson to the class,

“I had struggled to go and look for a sighted person to come and read for me, like this one, then I will just prepare myself and go and give the lessons.”

The day is marked to honor Louis Braille, the inventor of the Braille system of reading and writing for the visually challenged.

January 4th has been observed as Braille Day since 2019 after the United Nations General Assembly picked it in 2018.

It involves a script with raised dots that can be read with the fingers by people who are blind or who have low vision.

The UN made the decision in order to raise awareness of the importance of braille as means of communication in the full realization of the human rights for blind and partially sighted people.

South Sudan, just like any other country globally with a number of visually impaired has benefited from the system.

According to the World Bank, there are at least 1 billion people around the world living with some form of disability, 80 percent are located in the so-called developing countries.

These data point out that disabled people are exposed to a long series of limitations and abuses due to their status.

This happens especially in countries where social protection and health services are weaker.