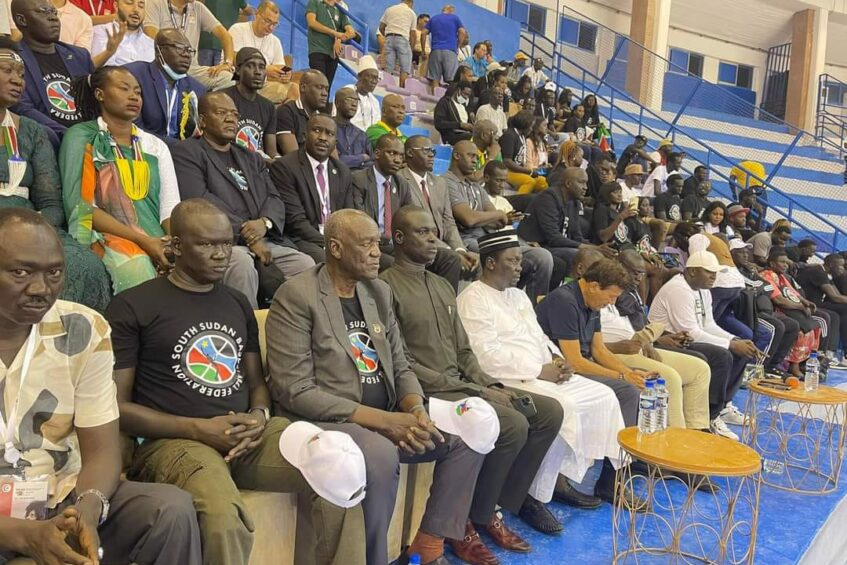 Others were the Minister of Roads and Bridges, Simon Mijok Mijak, Minister of Investment Dhieu Mathok Diing, Minister of Environment and Forestry Josephine Napon, and Deng Dau Deng, Deputy Minister of Foreign Affairs and International Cooperation.

Prior to the game against Senegal, Abdelbagi and several of the ministers were in the North African nation to attend Japan – Africa investment conference on Saturday.

The event in Tunis, is Japan’s effort to counter the influence of economic rival China, which has steadily grown its economic imprint on the continent.

Meanwhile, South Sudan were humbled by a dogged Senegal in their first game of the Window 4 qualification competition at the Mohamed Mzali Arena, Tunisia.

Senior Presidential Advisor, Kuol Manyang Juuk and the President of South Sudan Football association Augustino Maduot Parek, were also present to watch the Lions of Terenga raining it on the South Sudan men.

The Bright Stars could not profess their aggressive and intense selves and lost by a three-point difference (69-66), in front of a huge crowd of fans.

On Saturday evening of 28 August, they take on the Democratic Republic of Congo, before battling it with the Pharaohs of Egypt who had just beaten the champions of Africa, Tunisia the night before.