US diplomat calls for suspension of Mayendit, Koch commissioners 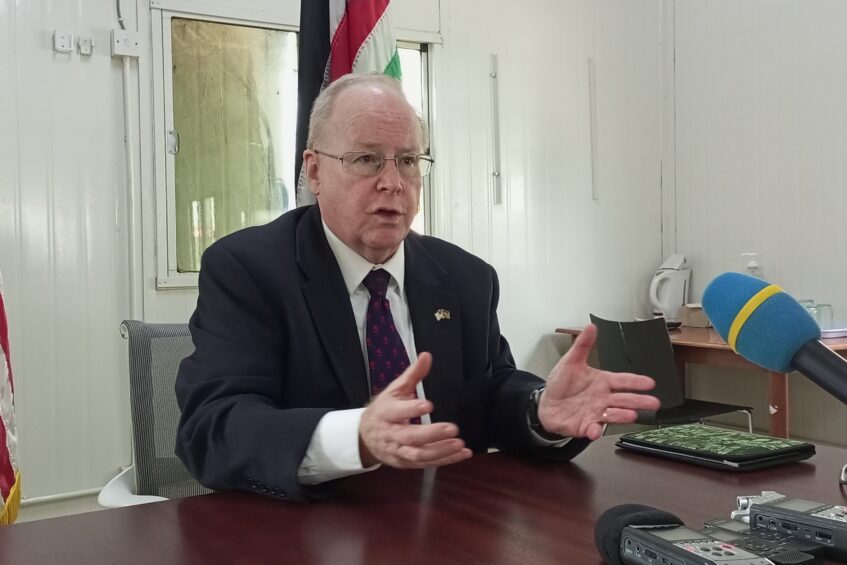 The outgoing Chargé de’Affaires at the U.S. Embassy in Juba has reiterated his appeal to the country’s authorities to suspend the Commissioners of Koch and Mayendit over instigating violence in southern Unity State.

Last month, the ceasefire monitoring body, CTSAM-VM alleged that the commissioners of Mayendit and Koch in Unity, are to blame for the deadly violence that rocked Leer County as well as parts of Koch County.

During his farewell remarks at press conference in Juba Thursday, Ambassador David Renz said he questions why the two commissioners are not made to answer for their role in the ethnic violence in southern Unity State.

“I have spoken out publicly asking why the Commissioners in Koch and Mayendit counties are not been held accountable for what is absolutely clear is their role in violence there. They should be suspended from their office pending South Sudan investigation into the conduct. They shouldn’t be allowed to continue to fuel this conflict,”  Mr. Renz remarked.

According to a report by the UN Mission in South Sudan, 72 civilians were killed and 64 women and girls were raped between February and April in Leer County of Unity State.

The two commissioners of Mayendit and Koch have been implicated in different reports for allegedly instigating the deadly violence that left many people killed and hundreds of others displaced in Leer.

Commissioner Gatluak also termed as baseless the accusations against him by the ceasefire monitoring body CTSAM-VM.

Meanwhile, the US diplomat urges the unity government to graduate the unified forces to help hold accountable those fueling the inter-communal violence in the country.

“What I have been pressing for, and what I still believe is possible, is some of the steps that are finally happening and will begin to accelerate the graduation of the unified command,

“So that they are properly deployed to bring sub-national violence under control in this country. The country will begin to hold accountable people responsible for that violence,” Mr. Renz said.

Ambassador Renz also reaffirmed the US commitment to support the implementation of the peace agreement, and the creation of conditions necessary for holding free, fair and democratic elections.

David Renz began his assignment as Chargé d’Affaires at the U.S. Embassy in South Sudan in August last year.

He previously served as the Deputy Chief of Mission at the U.S. Embassy in Addis Ababa, Ethiopia as well as Counselor for Political and Economic Affairs at the same Embassy.

Mr. Renz has over 25 years in the U.S. Foreign Service.

Eye Radio’s efforts to get a comment from Unity State authorities on the matter were not immediately successful.