You are here: Home  |  Justice | News   |   Three soldiers get 5 years in jail for killing police officers in Leer 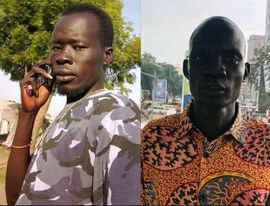 Capt William Nyuon Jany (right) and Segt. Majak Thian who were killed during a shootout with a military unit trying to break into prison cell in Leer County. | 4th March 2022. | Courtesy

The Court martial in Unity State has sentenced three soldiers to five years in jail and dismissed them from military service, for killing two police officers in Leer County in March this year.

The court martial demoted the trio to civilian ranks and dismissed them from the army.

Convicts Col. Gatkuoth Dieng, Capt Kerebino Ruai and Ruai Gatkuoth are also fined 51 head of cattle each as a blood reparation for the victims.

Reacting to the verdict, a sibling to deceased William Nyuon Jany  expressed dissatisfaction with the the court ruling.

“We as the family are happy with the sentence, but we not convinced with the blood compensation figure because they were killed by guns, and so the compensation supposed to be one hundred heads of cows,” Tap told Eye Radio on Friday.

Before the verdict was passed, a statement of the family seen by Eye Radio demanded death sentence, which the court deemed inapplicable.

In March, Col. Gatkuoth Dieng, Capt Kerbino Ruai and Ruai Gatkuoth, who were training as peace forces at Muom training center, stormed Leer town to forcefully abduct a suspect who was in prison for murder.

Mayen Kuol, an armed civilian was detained for allegedly murdering combatant Mut Kubai along Muom-Leer town on 26th of January.

However, a unit of soldiers reportedly took the law into their own hands after claiming delayed justice for their colleague.

The officers alleged to be under the command of Brigade 12 commander in the area took the decision to break into the prison cell to take away the suspected killer of their colleague.

The incident escalated into a deadly gunfire, after some police officers guarding the prison tried to resist their intended mission.

Two of the police officers were shot dead and two others from the attackers suffered severe wounds during the gunfire that was at proximity.