You are here: Home  |  News | Sports   |   Modric and Croatia stand between Messi and World Cup final

Modric and Croatia stand between Messi and World Cup final 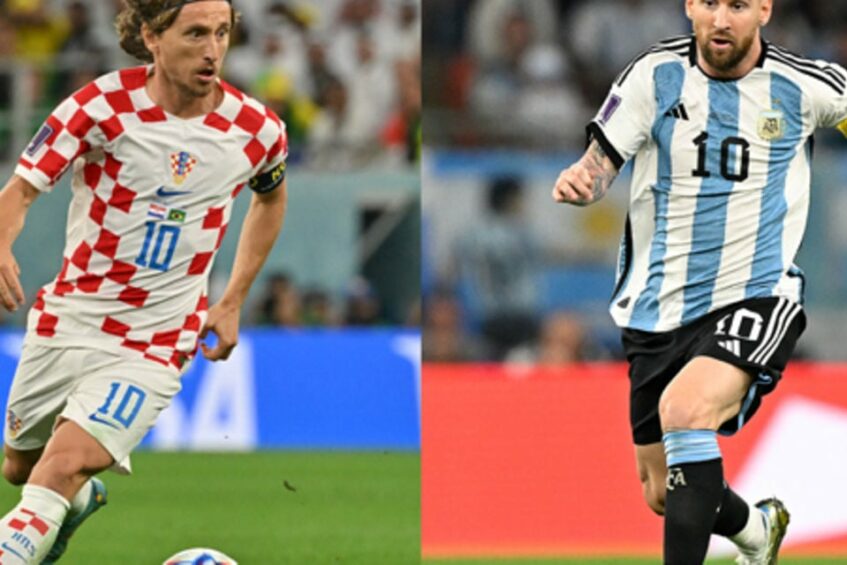 Lionel Messi and Argentina’s World Cup dream remains alive but an indefatigable Croatia side inspired by the enduring brilliance of Luka Modric stands in their way in Tuesday’s semi-final in Doha.

Argentina have recovered from the shock of losing their opening game in Qatar to Saudi Arabia and made the last four with an exhausting win on penalties against the Netherlands at the end of a fractious quarter-final on Friday.

Having been 2-0 up and cruising after 83 minutes, with Messi setting up one goal in sublime fashion and netting a penalty, they conceded twice late on and had to survive extra time before triumphing 4-3 in a shoot-out.

Backed by an enormous contingent of travelling supporters who have brought the passion, noise and colour of Argentina’s own stadiums to this World Cup, Messi and his teammates are starting to believe this really could be their year.

“We have balls, passion, heart and we are doing this for 45 million people,” said goalkeeper Emiliano Martinez, and Argentina’s optimism now has only increased after seeing great rivals Brazil go out in the last round.

Now aged 35, this has been billed as Messi’s last chance to win a World Cup, eight years on from Argentina’s defeat in the final to Germany in Rio de Janeiro.

He is determined to seize the chance and has already scored his first two goals in the knockout rounds of any World Cup, netting against Australia in the last 16 before his penalty against the Dutch.

World Cup glory would complete a wonderful career for the seven-time Ballon d’Or winner, who is possibly the greatest club player ever.

After years of being unfulfilled at international level he inspired Argentina to victory at last year’s Copa America, but he knows there are no more dogged or durable opponents than Croatia.

After all, any sense of relief at avoiding having to play Brazil in the last four will be tempered by the prospect of facing a Croatian side who knocked out the favourites on penalties and never know when they are beaten.

“They are a great team who matched up to Brazil and at times were much better,” admitted Messi.

“They have good players across the whole midfield and they have been working with the same coach since the last World Cup, so they all know each other very well.”

‘Safer than money in the bank’

Argentina coach Lionel Scaloni switched to a five-man defence against the Netherlands as he brought Lisandro Martinez into his line-up.

But the midfield is always key against Croatia, with Modric still controlling games at 37 and Marcelo Brozovic and Mateo Kovacic completing a formidable trio.

After reaching the final four years ago, Croatia have beaten Japan and Brazil on penalties to make the semis here.

They have gone to extra time in eight of their last nine major tournament knockout matches and the nation of just four million people has nothing to lose as they eye a place in the final against France or Morocco.

And in Modric they have a master, the 2018 Ballon d’Or winner who starred as Croatia beat Argentina 3-0 in the group stage four years ago.

“I think Mateo, Luka and Marcelo are the best midfield in history. When you pass them the ball, it is safer than having your money in the bank,” said Josip Juranovic, another standout at right-back.

“We are so lucky to have them in the team.”

Modric’s history with Argentina goes back to 2006, when he made his international debut for Croatia aged 20 in a friendly between the teams.

Messi scored in that game but Croatia won 3-2. Zlatko Dalic’s team will not be afraid of Argentina or their number 10 when the sides meet again at Lusail Stadium.

Asked about how they would handle Messi, Croatia forward Bruno Petkovic responded: “We don’t have a specific plan, at least not yet, for stopping Messi and usually we don’t concentrate on one player, but Argentina is not only Messi.”

Two players who will not feature for Argentina, however, are defenders Gonzalo Montiel and Marcos Acuna, both of whom are suspended.