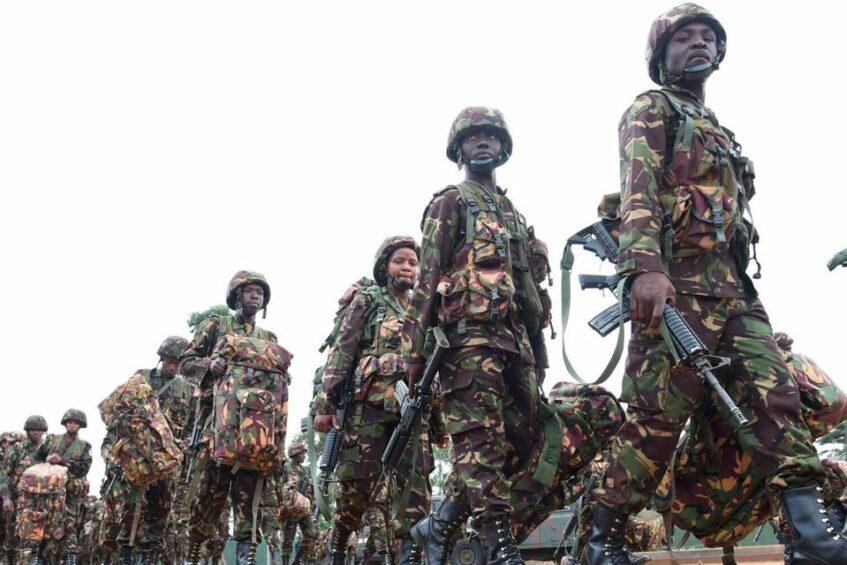 KDF soldiers during Madaraka Day celebrations. A 23-year-old recruit that the military dismissed for being HIV positive has sent his former employer a demand letter, while disclosing that he plans to go to court in seven days. (Photo: Nation Media Group).

A 23-year-old recruit that the Kenyan military dismissed for being HIV positive has sent his former employer a demand letter, and disclosed plans to go to court in seven days.

This comes after last week’s investigations by the Nation found that in December last year the recruit (name withheld) was kicked out of the force after tests were conducted without his knowledge and consent.

Speaking to the Nation in a telephone interview on Thursday, his lawyer, Mr Timothy Wafula, said that all his client wants is justice.

“It is standard practice to establish contact before filing the case, which is what we have done through the demand letter,” he said.

“We have given him all options available as we discuss his issue but we shall for sure be seeking punitive damages for testing him without consent, compulsory testing, discrimination,

“Violation based on the fact that they dismissed him due to his positive HIV status, the public disclosure of his HIV status and the lost opportunity considering that the was officially recruited as a general duty recruit as his calling letter indicates was platoon number 58 apart from being dispatched to Simba Division houses,” he said.

On Thursday, six civil society organizations, in an official statement condemned the move by the Kenya Defence Forces (KDF), terming it a violation of rights of people who have HIV.

“Our attention is drawn to a recent newspaper article that was published in the Daily Nation, September 1, 2022, titled ‘KDF tested me without consent, then threw me out for HIV positive status’.

The article detailed how the KDF, through its Recruits Training School in Eldoret, violated the rights of a 23-year-old recruit based on HIV status.

“The young recruit, having passed all physical and medical tests, had reported to the training school. Unknown to him, a further HIV test was undertaken without his consent.

He would later be called out from a customary morning parade and dismissed from training without being provided with any specific reason or accorded an opportunity for due process.

The recruit later learned that his dismissal was occasioned by his HIV positive status,” the organizations stated.

“We strongly condemn these actions of the KDF training school that violated the rights of the young recruit. These actions further heighten stigma and discrimination against people living with HIV in Kenya,” they said.

The groups also highlighted that it was worrying that KDF dismissed the young recruit based on HIV status, notwithstanding the fact that such action clearly violates the Constitution.

“Article 27 of the Constitution prohibits discrimination based on health status. In this case, it was apparent that through prior medical testing, the young recruit was physically fit for service.

The groups further called upon the chief of the Kenya Defence Forces to make public the military’s HIV workplace policy.

They point out that the HIV test was conducted without the knowledge or consent of the recruit, a clear violation of section 14 of Hapca that prohibits HIV testing without informed consent.

“It is also apparent that the results of the test were first disclosed to training officers who proceeded to dismiss the recruit. This disclosure is also contrary to provisions in Hapca.”

Ms Stephanie Musho, a human rights lawyer and sexual reproductive health expert who agrees with Mr Wafula, said that the actions of KDF give rise to at least six legal issues for consideration under Hapca.

“These are discrimination based on health status; testing without consent as is illegal under S.14 (1) (a); compulsory testing as outlawed by S.13 (2) (a); and disclosure of HIV status in public – as this was communicated to him in public at a parade with recruits, which is contrary to S. 18 (a) that stipulates results must be relayed confidentially and only to the tested person”

“Moreover, the law provides that there must be pre-test and post-test counselling for HIV testing in S.17(1) of the Act. This was not accorded to (the victim). Additionally, arising from KDF’s actions are the issues of unfair dismissal and loss of earnings.”

She highlights that four of the six issues are ripe actions for determination before the HIV and Aids tribunal.