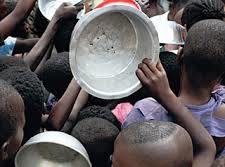 The ongoing crisis in the country and the restriction of movements at the Ethiopian border is affecting the flow of goods into Pochalla County, an official has said.

The County Commissioner says that the population in the area lack food.

Commissioner Joseph Ukello told Eye Radio that the fighting between government forces and forces of SPLA-in Opposition has displaced people in the area.

“People are hungry and with these movements, they run to the bush sometimes. So everything is confused by the moving defecting rebels,” said Mr Ukello.

Last weekend, a section of SPLA soldiers went on rampage in the area as they forced their way out of the town.

Commissioner Ukello said Ethiopian troops deployed at the border are restricting the movement of any person into Ethiopia where they mainly gets their food supply.