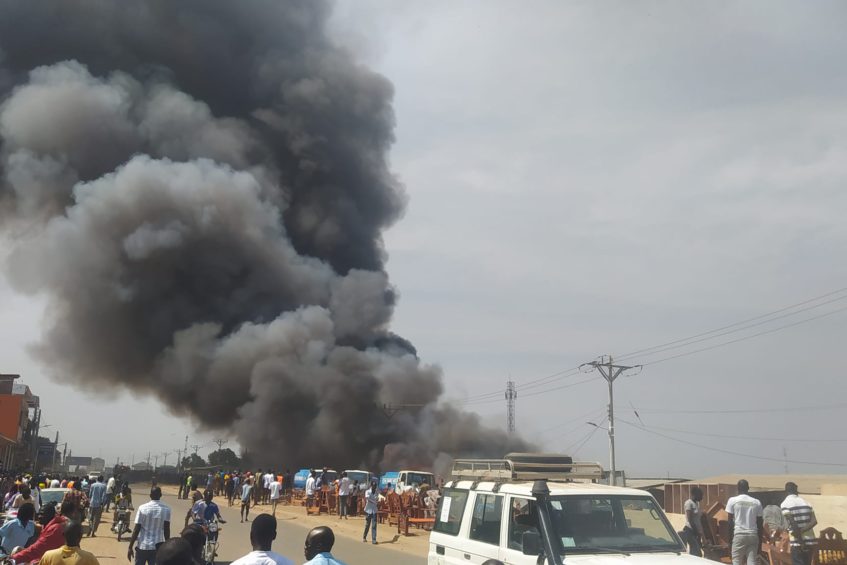 Gudele fire that burnt nearly 20 shops at the Gudele-Buaba of Juba on Monday, Dec 13, 2021- courtesy

Some members of the public have said the Fire Brigade Services is attending to emergencies without adequate resources leading to loss of life and properties.

They claimed the fire tenders that responded to the scene did not carry water, as they are mandated.

This comes after fire reportedly burnt nearly 20 shops at the Gudele Buaba of Juba yesterday.

The fire broke out at around 12:30pm and lasted for nearly 2 hours.

According to one of the traders, the inferno allegedly resulted from an electric pole connected to the shops along the Gudele Highway before it spread to several other iron-sheet business centers.

The Mayor of Juba City Council, Michael Ladu Alla-Jabu who rushed to the scene of the inferno described the damages as catastrophic.

According to the 2011 constitution, as amended, the Fire Brigade Service is tasked with preventing and protecting the people of South Sudan and their property from fire and disasters.

The fire raged through several shops before being put off by the fire brigade about an hour later, according to eyewitnesses.

About two weeks ago, fire also devastated shops in the Gudele-1 area and quickly spread through a large section of the area.

Last week, traders at the Custom Market of Juba counted losses of goods worth millions of South Sudanese Pounds after fire gutted 62 shops on Monday evening.

This, totals to at least three fire incidents at the Custom Market alone.

In 2015, fire ripped through part of Custom Market and destroyed at least 15 shops.

Also in 2019, a fire outbreak at the same market burnt down some shops with traders estimating over hundreds of millions South Sudanese pounds loss.

Members of the public have often criticized the government, particularly the fire brigade for doing less or nothing about fire outbreak mitigation and control in the city and other towns across the country.

They called on the government to reform the Fire Brigade Service to help prevent the recurrence of fire razes in the country.

Those who spoke to Eye Radio’s Dawn show on Tuesday called on the top leadership to make changes to the department.

One Emmanuel in Juba said: “The Fire Brigade Service should immediately be reformed, there should be fire trucks in all the residential areas to be ready 24/7 but this is not happening. I’m even sure the department has few trucks. If there is a fire outbreak at Gerei, when will they arrive there to contain the fire? So, the department should be reformed as soon as possible. Change the leadership of the Fire Brigade Service.”

Deng Maku in Jebel said: “Fire Brigade should have stations in Gudele, MUnuki, Konyokonyo, and Custom among others. They should be ready all the time, many people lose their lives, and the leadership should really reform this department.”

One Isaac in Juba said: “If the President is listening to us now, the ministry of interior should have capable officials, people who can deliver, why do we continue to lose lives and properties because of fire outbreaks all the time, please change the leadership of the Fire Brigade. We are suffering, bring for us people who can deliver service to the common citizens.”

Others also suggest that the president remove the Inspector General of Police for failing to manage the Civil Defense sector.

They argue that Lt-Gen. Majak Akech is doing little to control and respond to fire razes in the country.

Ustaz Majok in Juba PoC said: “Look at this embarrassment, why are they coming with a fire truck without enough water? Where is the water, are they really serious about saving lives and properties of people? This is a clear failure, the IGP should immediately be removed from his position because he is not doing his job correctly.”

For his response, the IGP blames yesterday’s Gudele fire on the government’s busy schedule with peace implementation.

Lt-Gen. Majak Akech also claims that the government has limited resources to oversee the sector.

“You should also consider our situation, our ability is limited and the city is big, the incident may happen in different places at the same time,” said Gen. Majak Akec.

“They city is also not demarcated in a well-developed manner, like you can say this road has this number, roads are bad, so consider this factor.

“We have limited resources and we want our citizens to consider this. The government has a lot of obligations, peace implementation, paying of civil servants among others, we have numerous challenges in the government.”