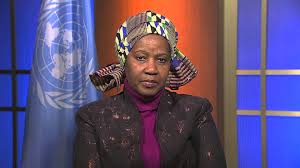 The Executive Director of UN women has called for women in the country to be leaders and to take part in the political talks in Addis Ababa.

Ms Phumzile Mlambo Ngcuka said at the end of her three-day visit to Juba that she had met President Salva Kiir and national ministers in a bid to find ways to engage women in nation building.

Madam Mlambo told journalists she had also discussed security issues with the head of state.

“This is not the first time that we are doing this,” she said.

“Right at the beginning of the talks, we already reached out, through IGAD, to the government as well as the opposition forces to etch the inclusion of women in line with our Security Council Resolution 1325, which expects women to participate fully in time of conflict, in peace making, in the negotiations and discussions, in the implementation of the outcomes of the peace process and in all other related modalities, which include nation building which is very critical also for this country.”

Madam Mlambo confirmed that women across the country, including women in the UNMISS protection sites, condemn the failure to implement the cessation of hostilities agreement:

“Many of the women also shared with me the pain of being separated from their children and of course some of those whose family members, friends, relatives, partners have been killed. We therefore join also the call for the cessation of hostilities.”

Madam Mlambo also revealed that the UN Women will engage women around the country in peace activities.