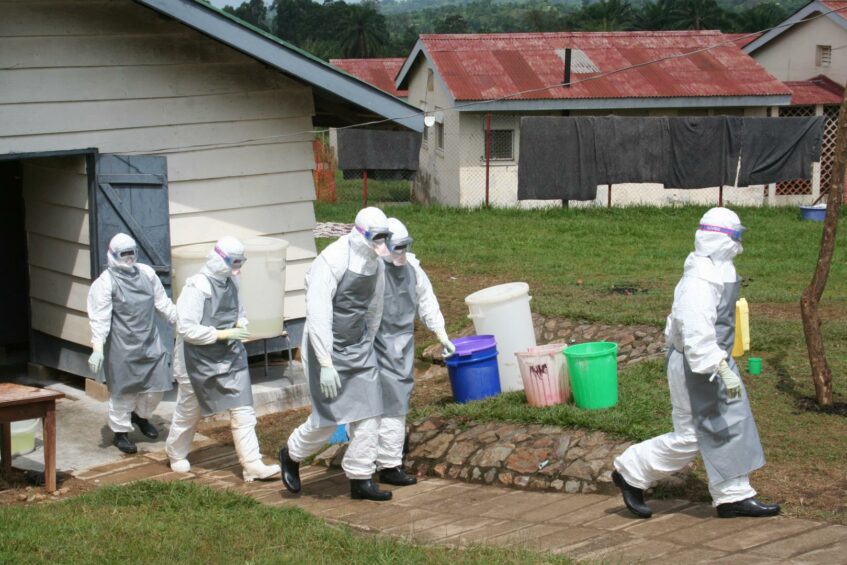 Health workers at an isolation centre in Uganda in 2017. (Photo by World Health Organization).

At least four people who presented with signs and symptoms of Ebola escaped from health workers in Uganda’s Madudu Sub-county, Mubende, who had gone to evacuate them from the community on Wednesday, district officials have revealed.

They are the contacts of the 24-year-old man who passed on at Mubende Regional Referral Hospital on Monday.

The Resident District Commissioner, Ms Rosemary Byabashaija, said many people are ignorant about the epidemic.

“The four people had signs but decided to run away and the other two refused to be brought to the hospital. They said ‘for us, we are not going for treatment whether you like it or not, for us we shall die from here,’” she said.

She added: “People don’t believe in the disease or are still ignorant about it but we have decided to continue with sensitisation and we have formed the sub-county taskforce lead by sub-county leaders to take a lead in sensitising the community after realising that people believe in their leaders.”

Statistics from the Health ministry indicate that 43 contacts of the victims but some have not yet been evacuated from the communities.

Health officials and civic leaders have also come to an agreement of not closing schools for a period of time as parents have been pleading for fear that their children could contract the virus.

Ms Byabashaija said the district cannot close schools because Uganda operates under one curriculum and it will not make sense to close schools in Mubende yet other schools in different parts of the country are operating.

Mubende Hospital has so far has16 patients in its isolation centre. Four of  these are in a poor condition.  No death was registered yesterday.