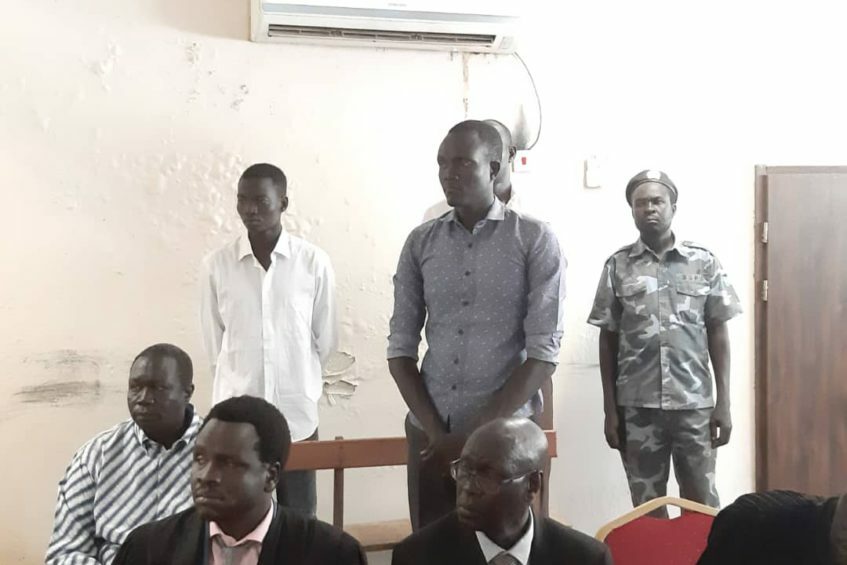 Some of the suspects arranged in court from one to six based on their role in the attempted murder of Rumbek Catholic Bishop Christian Carlassare @ Deniel Michael Photo 02.03.2022

The High Court in Juba has sentenced four men including a catholic priest to different jail terms for conspiring in the shooting of the catholic Bishop of Rumbek.

In early March, Priest John Mathaing was charged with inciting and plotting against Bishop Calassare, while Laat Makur Agok and Moris Ater for executing the attack on the bishop, and another, Samuel Maker for hiding the crime exhibits.

Moris Sebit Ater and Lat Makur Agok were both sentenced to 4 years in Prison.

Carlassare, an Italian Comboni priest was shot twice in his legs by gunmen at his residence in Rumbek town of Lakes State, in April last year.

Following the incident, Police arrested 35 people in connection with the shooting- most of whom were released over lack of sufficient evidence.

The High Court Judge, Alexander Subek Samuel revealed that Mathiang and his associates were identified to have colluded in the assassination attempt of the Bishop.

His phone calls before the crime were retrieved during a police investigation.

The court found the three men guilty in accordance with articles 334 and 335 of the penal code act 2008.

Reacting to the verdict, the defense lawyer, Malith Mading said he disagreed with the findings of the judge, citing what he termed as lack of concrete evidence in the sentencing of the defendants.

Mading said he will appeal the sentence within fifteen days.

“We agree with the decision but we disagree with the finding of the judge. The finding was not based on any law or any evidence as far as the law is concerned you cannot convict an accused person on evidence of another accused,” Mading said.

“This evidence was not presented by the prosecution team and as section Thirty-Four, of the evidence act, should have been applicable and if the judge has ignored it we have the right to appeal and we are going to appeal the decision.”

Carlassare, an Italian Comboni priest was elected on March 8, 2021 as the bishop of the Diocese of Rumbek.

He had spent months on treatment in Nairobi, Kenya before he was discharged and consecrated as the Bishop of Rumbek Diocese in March.