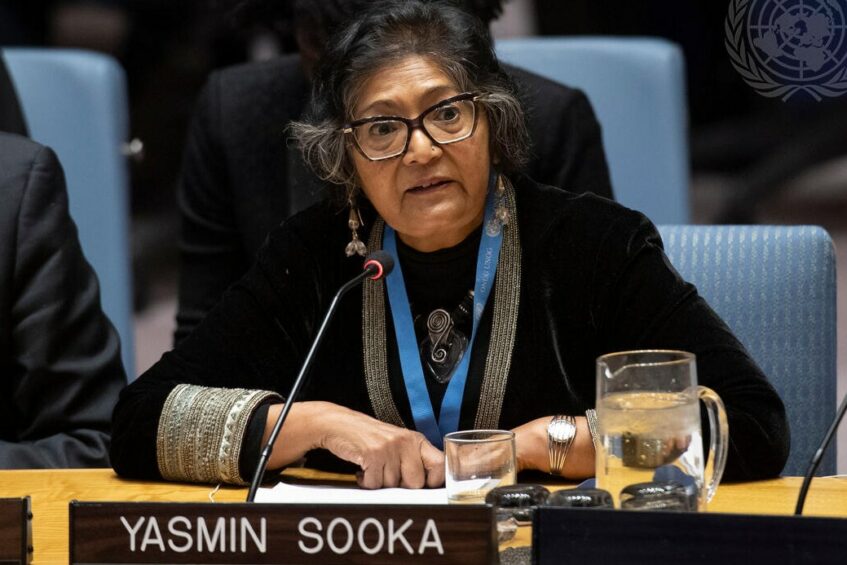 Yasmin Sooka, Chair of the Commission on Human Rights in South Sudan, to the Human Rights Council speaking during a UN General Assembly/Courtesy

UN rights group says survivors of sexual violence including women gang-raped multiple times in South Sudan, have been left without medical and psychological care as funding has reduced due to the war in Ukraine.

The commissioners of the United Nations Human Rights Commission on South Sudan said they noted with concern the emotional exhaustion of several women who have been raped up to five times after a visit to parts of the country last week.

Yasmin Sooka, the chairperson of the commission said she and members of the delegation – during a visit to Western Equatoria State – were told survivors of sexual violence were like ‘zombies’, after suffering emotional exhaustion for lack of medical and psychological support after experiencing multiple rapes since 2013.

“Just imagine what it means to be raped by multiple armed men, pick yourself up for the sake of your children, and then for it to happen again and again and again. These women are asking us when it will stop – 2013, 2016, 2018, 2021, and now in 2022 – they say they keep telling their stories, and nothing changes,” said Sooka.

In another visit to Unity State last week, the members of the commission noted that access to medical services for survivors of sexual violence have been affected by funding cut. Yet, the demand for the services continues to surge.

In the deep villages where medical services are nonexistent, the commission said, women no longer report multiple violations, in the face of unwanted pregnancy and sexually transmitted diseases.

Meanwhile, Barney Afako, a member of the commission said “it’s going on all the time, largely unseen. It’s only that we cannot document it consistently throughout the country and that the international community’s attention is elsewhere.”

The watchdog body said the absence of a formal court to prosecute serious crimes such as murder and rape, and impunity are largely to blame for the widespread violations.

In its latest report published in March 2022, and titled Conflict-related sexual violence against women and girls in South Sudan, the commission criticized the national army, SSPDF, and opposition group SPLM/A-IO among others for murder, rape, displacement of civilians in parts of the country since the outbreak of the conflict in 2013.
According to the

According to reports, the war which ended in 2018, has killed an estimated 400,000 South Sudanese,