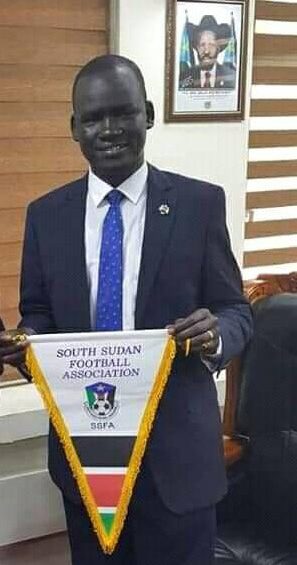 Dr. Albino Bol, Minister of Youth and Sport in 2020. Courtesy

The government has pledged not to interfere with the forthcoming elections of the South Sudan Football Association.

According to the Minister of Youth and Sport, the government has no intentions to influence the election or impose the winner.

“The Republic of South Sudan in the person of Minister of Youth and Sports is neutral in the electoral process,” he asserted.

The SSFA elections are scheduled for Thursday, July 22.

Five candidates are contesting for the Presidency of the Football Association.

Minister Dr. Albino Bol said his ministry has no particular preference over the choice of candidates.

He pledged to support whoever will be elected President of the SSFA.

“Those who have been admitted as candidates and those who have met the requirement are all South Sudanese,” Dr. Bol affirmed. “And anyone who will win among them will be automatically recognized by the Republic of South Sudan.”

Those contesting for the position of President of the Football Association are; Lual Maluk, Peter Achuil, Augustino Maduot, Shafiq Gordon, and incumbent Francis Amin.

There are also five candidates for the position of Vice President, and 14 for the membership of the Board of Directors.

Dr. Albino Bol stated that the government will ensure the integrity of the elections is preserved through the provision of electoral security.

“To give credibility is very important because for us to say the election is free and fair, we need to be there as the government to provide protection -as observers.”

The Minister made the remarks during the first SSFA Presidential Debate organized by Arenas Sport Magazine on Sunday, July 18, 2021, in Juba.