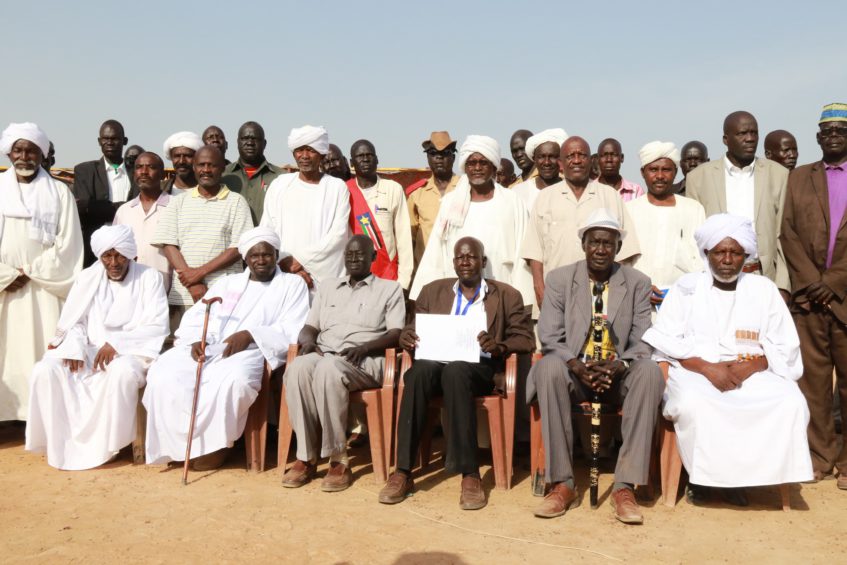 A similar conference was held in 2017 as shown here where leaders of the Misseriya and Dinka Malual communities pose with a signed pre-migration agreement. Credit|UNDP

A five-day peace conference between Dinka Malual of South Sudan and Misseriya of Sudan has ended with a call for adherence to peaceful coexistence between the two border communities.

Chiefs, women and youth representatives from the two sides met in Aweil town last week where they discussed issues related to the bi-annual peace dialogue along the Sudan-South Sudan border.

“The first two days were for post-migration and three days were for the pre-migration. We have set the new rules and new guidelines that will guide them throughout 2021,” said William Kolong Pioth, Coordinator for South Sudan Peace Commission in Northern Bahr el Ghazal State.

According to the UNDP that supports these cross-border initiatives, communities along the political border of Sudan and South Sudan have been linked for generations. Each year, areas of Western and Northern Bahr el Ghazal, Unity, Warrap, Upper Nile and Abyei become migration corridors for pastoralists. The movements can create high risk for insecurity, as attacks or disputes occur.

It said along the border of Aweil East State, the drying of seasonal rivers instigates a migration season which brings the Misseriya tribes into the area in search of water and pastures for their cattle herds.

But this year’s conference has been described as extensive and assertive.

Among the resolutions, the participants agreed that the blood compensation shall be 31 heads of cattle – 16 heifers and 15 bulls – a fine of 150,000 pounds or its equivalent and legal procedures shall follow.

And in case of any wounded person whose part of the body is damaged, they shall be compensated with 15 heads of cattle and a fine of 100, 000 pounds.

Above all, if somebody rapes a woman from either community, he shall pay 10 heads of cattle and a fine of 100,000 pounds.

Therefore, to minimize theft, any person who steals a cow, sheep, goat or donkey shall be arrested and required to return the stolen animal and pay a fine not exceeding 100,000 South Sudanese Pounds.

Woman told to pay ex-fiancé for breaking his heart