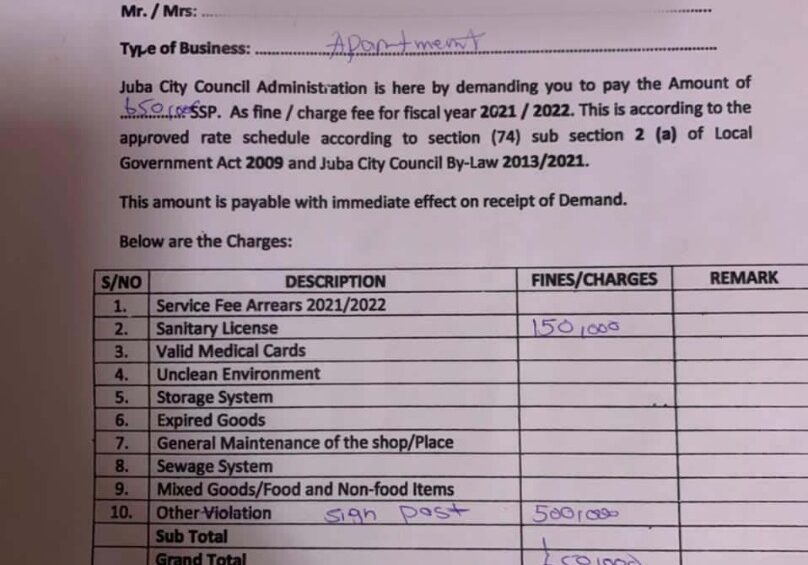 The Juba City Council has denounced grievances from some traders and businesses that there are multiple taxes imposed by the authority.

The Deputy Mayor of the City Council has come out to dismiss widely circulated invoice bearing the name and stamp of the Council.

This week, some traders posted on social media, invoices containing several license fees, service fees, arrears and fines that they were made to pay by the city council.

In a financial receipt dated 3rd of May 2022, addressed to Hope Valley Apartment, the City Council collected 650,000 South Sudanese Pounds as fees for the fiscal year 2021/2022.

The Department of Health and Environment at City Council charged the firm 150,000 SSP as a Sanitary License fee and 500,000 pounds as a signpost fee.

In the notice, the Council justified the demand as in accordance with the local government act of 2009 section (74) sub-section 2 (a), and Juba City Council by-laws.

However, responding to the traders’ complaints on Thursday, the Deputy Mayor of Juba City Thiik Thiik Mayardit denied that the institution is extorting money from traders.

“No city council member goes to any house of somebody or to any shop it is you to come and pay when you are responsible,” he said.

Thiik is now urging the traders to report the matter to the concerned authorities in Juba City.

“If there’s anybody who happens to be taxed more without knowing that this is not in the rate schedule, let him come up and that should not be matter of saying, because some of them are accusing us and they want to run away with the other thing,

“The other people who are accusing us are the one even causing the problems, so if you know that you are eligible to pay why are waiting for the people to go into your place come to the city council where the money is paid and that is all of the world,” the Deputy Mayor stated.

Meanwhile, some of the traders said the city tax collectors decide to charge them anytime they want to.

“Some of the challenges we are facing at the market is that actually we have some issues of charges the traders are really being charge a lot of charges some of this charges you cannot well explain,” said Evans one of the traders at Konyokonyo market.

“..for instance we have the issues of the verandas this are being charged so in most cases it’s good for the traders to be informed earlier then they prepare than coming just you fines someone says oh this,” he added.

Another trader, Mohammed Adam said they have been tolerating what he terms as illegal fines from the Council.

“This is the problem the illegal fines without notice and when our representatives in the market when they go the high office of city council they tell them what is happening in the market but they are not even considered that’s problem we have here,” he complained.

Last year, the Chamber of Commerce threatened on several occasions to sue the Juba City Council for over taxing traders in the city.

But the chamber didn’t have enough evidence to support its move.

Another trader Donato Lado voiced frustration over the issue.

“The problems we are facing in this market the first one is city council with the constant crackdown on traders inside the market creates an environment that is not fit for business,

“You will find the garbage people come to collect money then after gliding team will come fines without any notice and then license, a trader will have many fines within one week,” Lado said further.

However, the Chairperson of the state Chamber of Commerce Robert Francis Pitia said the body has formed a committed to investigate the concerns raised by the traders on multiple taxation.

He said the committee to be headed by the state minister of Finance is to verify the claims and collect evidence regarding the complaints.

“We need to cooperate with this security organs and the relevant institution who are collecting money so that we address all this issue we started, and the committee is already being formed headed by the ministry of finance central Equatoria State,” said Pitia.

The committee will be tasked to find out other forms of taxes imposed by certain institutions including the National Revenue Authority.