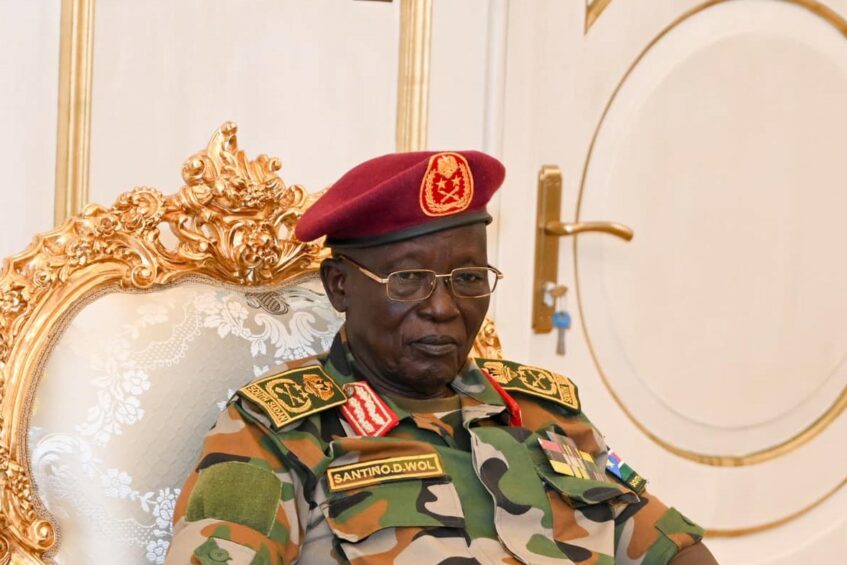 The Chief of Defense Forces, Lt. Gen. Santino Deng Wol has vowed to hold accountable those involved in the extra-judicial killing in Mayom County of Unity State.

It is unclear who authorized the firing squad for the three officers and one man who was burnt alive.

But in a press statement dated the 8th of August, the office of the state governor confirmed the arrest of four key commanders loyal to Stephen Buay,

The statement stated that the men were captured at the border between South Sudan and Sudan on 6th August 2022.

It says the men loyal to Gen. Buay Rolnyang were responsible for the killing of the Mayom County Commissioner.

In a video circulating on social media, four men were purportedly killed in the firing squad on Monday.

Three victims were tied together and then blindfolded before they were shot by soldiers in SSPDF uniforms in a bushy area.

The names of the slain men were not mentioned.

Speaking to Eye Radio, the SSPDF spokesperson said the army headquarters came across a video clip of the incident.

Major General Lul Ruai said the video prompted the leadership to convene a meeting over the matter Tuesday morning.

According to Lul, the Chief of Defense Forces directed an investigation into the incident to ensure the perpetrators are held accountable, saying the incident is unacceptable.

“The SSPDF general Headquarters saw the same pictures, we just had the consultations. I was directed by the chief of the defense forces that a thorough investigation is going to be carried out so that we know exactly who did the order of the killing to be carried out,” Gen. Lul told Eye Radio.

“It had not been part of our legacy, we during the SPLA, were known for capturing prisoners of war, taking care of them, treating them humanly, and in most cases, they were treated in accordance with the Geneva Convention,

“What we have witnessed in Mayom County of Unity State is unacceptable, the chief of defense forces has promised that a thorough investigation is going to be carried out and those who are behind the killing are going to be held accountable.”