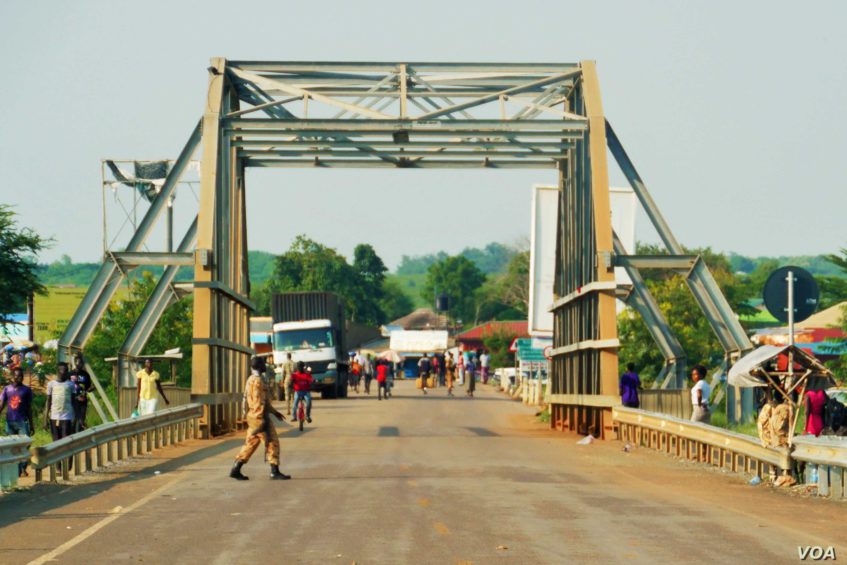 Nimule bridge, a stone throw away from Ugandan border side post, Elegu - Courtesy

The South Sudan-Uganda border in Nimule has been closed temporarily after gunmen killed two police officers in town Thursday afternoon, the head of police there has told Eye Radio.

Major David Kasmiro told Eye Radio the tension has now moved from the outskirts of Nimule to the town Thursday morning.

Kasmiro confirmed that his officers fell in an ambush as they were patrolling Nimule town.

Major Kasmiro says a Sergeant Major and a Warrant Officer were killed on spot by gunmen.

Major Kasmiro says one of the gunmen was arrested and now in police custody.

“The fighting has been transferred to the town, those cattle keepers started looting shops and houses,” Major Kasmiro told Eye Radio from Nimule town.

“Our forces were patrolling from yesterday [Wednesday] till today [Thursday] morning, when the situation turned to something else,

“There have been several attacks in the outskirts of Nimule and even at around 1 pm our forces were moving around with the car patrolling,

“Our forces who were patrolling around Nimule town felt in ambush and two police officers were killed but we managed to capture one of the gunmen,

“The border has been closed temporarily because the other side also closed and we closed ours so that our people cannot go outside.”