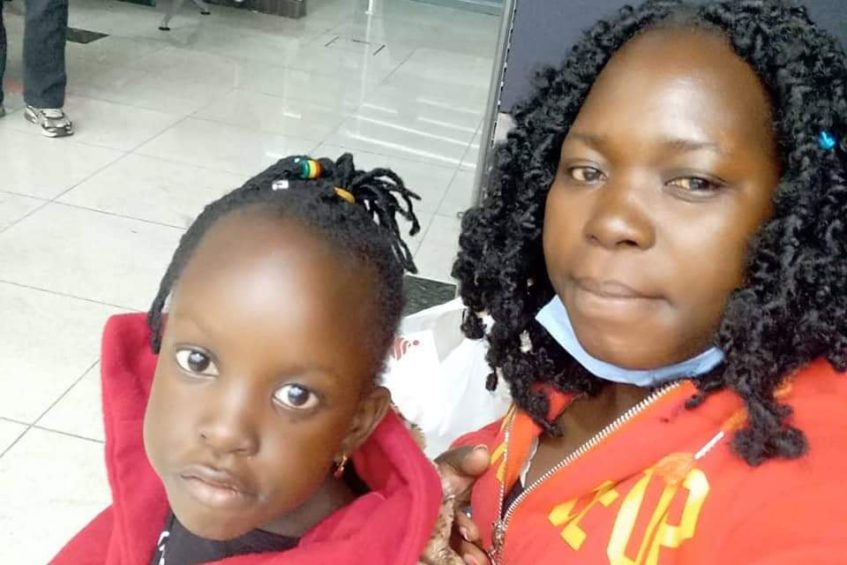 Mercy Tani, the daughter of Late Mantani and her mother Kiden Winnie at JIA while travelling to India on 7th Nov. Photo credit: Nicky Prince

The Afro-pop and dance group Hardlife Avenue Stars are appealing for financial support for the daughter of their late crew member, Murye Alex, aka Mantani, who is due to undergo surgical operation in India.

Marcy Tani, the 5-year-old daughter of the late Rapper was born with physical disability that made her unable to walk since birth.

According to Vocalist Siliman Musa, also known as Nicky Prince, the medical reports of Mercy shows that the surgery requires at least 50,000 US dollars.

Nicky says the daughter of the late rapper is already in India, awaiting two major surgeries.

He disclosed that Mercy will undergo a knees and a foot surgery that will involve fitting of internal fixers as well as some extra corrective surgeries.

Nicky Prince says Mercy and her mother Kiden Winnie are projected to spend at least 12 to 18 months in New Delhi.

Nicky Prince is now calling on well-wishers to help for the medical treatment of the little angel.

“The budget has come out and it is quite huge that the family cannot handle alone, it needs the support of everyone who has known the Hardlife Avenue Stars and who has loved our music and generally all the well-wishers” Nicky Prince told Eye Radio on Thursday.

He stated that; “The cost of the surgery plus physio therapy and then their stay in India is estimated at 50,000US dollars”

Before her father died in a motorbike accident, his major struggle was to help his daughter walk.

Rapper Mantani of the Hardlife Avenue Stars succumbed to head injuries he had sustained in an accident in Moyo Town, Uganda, in July this year.

He died after being referred to a hospital in Kampala from Lacor Hospital in Gulu.

Mantani, together with Nicky Prince and Linus, formed the most dynamic music trio in South Sudan in 2011.

They are popular for songs such as ‘Lubelede,’ and ‘Yaude’ that won the MTN/Eye Radio Music Awards in 2014 and 2016, and the latest ‘Ana Yau Arif’, among other hit songs.