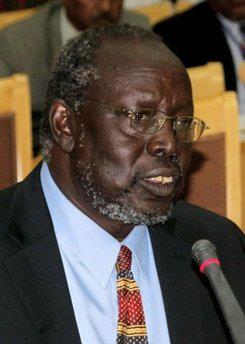 A South Sudanese researcher has urged the government to get rid of the ‘outdated Chinese technology’ employed in the oilfields and acquire modernized ones to increase production.

Dr. Lual Acuek Deng, the Managing Director at the Ebony Center advised the government to replace the pipeline and drilling machines which he believes are to blame for the dwindling oil production output.

“Get rid of inferior Chinese technology I am sorry to say that. I am not a diplomat, I am a researcher, I am a former Minister of Petroleum I know what that technology mean and bring America technology we will improve production,” said Dr. Deng.

In August last year, the Ministry of Petroleum disclosed that the oil production has decreased from 165,000 to 156,000 barrels per day.

Production however, resumed at the Thar Jath field, in Block 5A, at 3,000 barrels per day.

Dr. Deng, who  spoke during a panel discussion on financing development in South Sudan in Juba believes that replacing the decades old pipelines with new machines will enhance the capacity of oil production.

“With improved technology, we will be able to produce 500 or half a million barrels a day and let us assume that the oil prices will be $50 per a barrel by the end of our second decade of our independence we will be getting more than 12.5 million barrel a day which translate to 4.5 billion barrel a year, just oil.”

South Sudan currently does not have any significant storage capacity for its oil prompting it to export all of its crude oil via pipeline through Sudan.

According to the World Bank, oil and agriculture dominate of the country’s economy – with oil contributing 90% of revenue and almost all exports – while agriculture remains the primary source of livelihoods for more than four in five households.