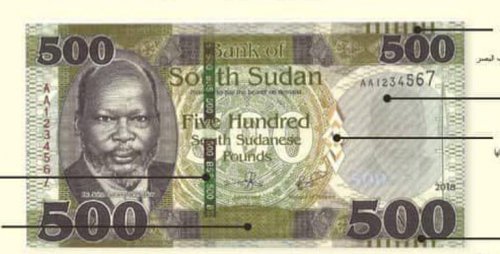 The Bank of South Sudan has announced the introduction of a new banknote of 500 pounds as a legal tender in the country.

The principal features of the new bank note include a water mark portrait of Dr John Garang de Mabior with a dominant color of light green, measuring 154 by 79.5 millimeter.

On the other side, the wordings include the “Bank of South Sudan” printed on the upper part and the face value of the note in bold is written horizontally in each corner.

Other wordings on the obverse include two signatures and a security strip near the middle of the note with the year 2018 written on the right lower corner.

While on the reverse side, the specifications of the new bank note include the Nile River, the bank of South Sudan printed on the upper part and a gold colored iridescent band 500 written in the middle.

The new 500 bank note is expected to be in circulation soon.

However, commenting on the introduction of the new banknote, Economist Garang Atem says the move by the Central Bank will address the cash load, but not the inflation.

“The introduction of the 500 note is not addressing fundamental problems of the economy,” he said.

“It is realization by the monetary authority that South Sudan is losing pounds over time and so the intention of trying to have small notes is when the currency is strong, but when the currency is valueless, that means what money can buy is so small so you need big notes.”

Mr Atem added that, ending the current conflict in the country and allow production of food and oil at their full potential – are the only remedies to address the fundamental problems facing the economy.