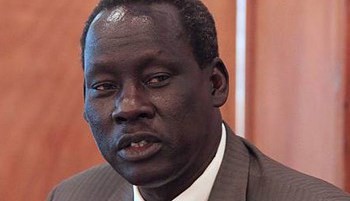 The Minister of East African Affairs said the split in the SPLM party has caused a lot of suffering to the people of South Sudan.

Deng Alor Kuol made the remarks during Thursday’s signing roadmap discussion in Juba.

Alor, a member of the SPLM Former Detainees said there’s need to reconcile and unite the SPLM to end the suffering of the people.

“I want us to unite. I want us to complete the peace process, if you look at the people who are still outside are SPLM, whether is General Paul Malong, Thomas Cirilo or Pagan Amum, you count them they are all SPLM,” he said.

In December 2013, political differences within the ruling party SPLM escalating into a deadly civil war that has killed hundreds of thousands and displaced millions into refugees’ camps.

Following the 2013 conflict, multiple factions bearing the name SPLM broke away from the main party, and are operating as independent political parties.

These include the SPLM-IO, SPLM Former Detainees, SPLM-IO-Kitgwang, and Real-SPLM, among others.

The parties to the 7 years of conflict are struggling to implement a peace agreement signed in 2018.

This has led to Thursday’s extension of the transitional period by 24 months.

However, Alor says, to implement the extension plan, the R-TGONU must bring to the round-table, all the holdout group to be part of this peace process.

The holdout groups who are not part of the 2018 peace agreement are General Thomas Cirillo of the National Salvation Front, and Stephen Buay Rolnyang of the South Sudan People’s Movement.

Other holdout factions in the opposition coalition – South Sudan Opposition Movements Alliance are Pagan Amum of the Real SPLM and Paul Malong Awan, leader of the South Sudan United Front.

For his part, the Minister of Higher Education, Science and Technology, said the roadmap should now include the holdout groups in the peace process.

Gabriel Chansong Chang said the Rome peace need to be incorporated to the Revitalized agreement to have a comprehensive dialogue that will pave way for development in the county.

“The other issue which is important is that we have the holdout groups, Rome initiative is ongoing. We want the Rome initiative to be concluded successfully so that we have a comprehensive peace agreement so that there will be no people in the forest to disturb us and thereafter we go for development.”