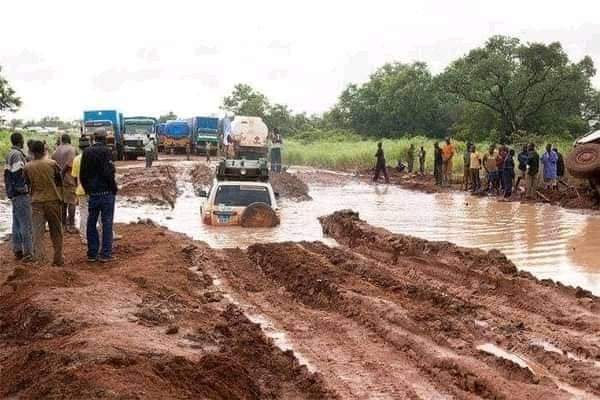 The Minister of Roads and Bridges Simon Mijok Mijak apologized for the bad conditions of roads in the country, saying the government is working hard to improve the transport sector.

Mijak – who made the remarks during the launch of a needs assessment report by the Ministry of Roads and Bridges on Wednesday, said the inconvenience faced by road users is not intentional.

“Yes, we are aware of what is happening to road users and I must take the opportunity on behalf of the Ministry (of Roads and Bridges), it is my duty to give the apology for that inconvenience it is not intended, and the Ministry is trying its level best,” he said.

Minister Mijak blamed the deteriorating roads network across the country on ‘massive volumes of water coming from the Congo and Ethiopian highlands.

“It affects the roads especial the gravel roads and even the asphalts as we have seen in May 2020 when the section of Juba –Terekeka road was just washed away by heavy rains,” he added.

The Northern Corridor Transit and Transport Coordination Authority conducted a road assessment report in Juba on Wednesday to evaluate and improve transport infrastructures across the region.

South Sudan remains one of the countries with the most underdeveloped road networks in the world, according to the World Bank.

The international finance organization states that most interstate roads consist of badly or non-maintained dirt roads, with only 300km of sealed roads and one sealed international highway linking Juba to Uganda.

This is despite the government’s allocation of a huge volume of crude oil to Chinese companies to build roads in 2019.